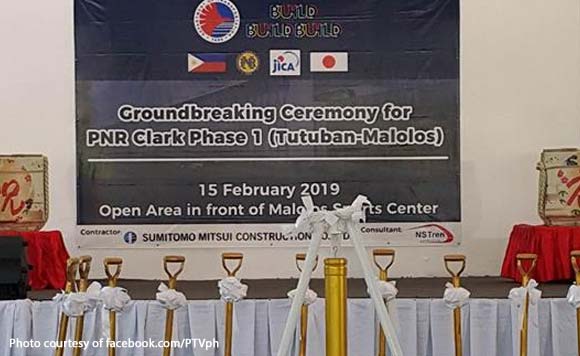 MANILA — Transportation Secretary Arthur Tugade announced on Wednesday that they are set to launch the Tutuban to Malolos portion of the North-South Commuter Railway (NSCR) project on Friday.

The segment, known as the Philippine National Railways (PNR) Clark Phase 1, will connect Tutuban in Divisoria, Manila to the city of Malolos in Bulacan.

The PNR Clark Phase 1 will have 10 stations spanning 38 kilometers and is expected to serve around 340,000 passengers daily once it starts operations in 2021.

“Travel to and from Bulacan is expected to reduce by 35 minutes from its current travel time of one and a half hours once PNR Clark Phase 1 is operational,” the DOTr said in a statement.

The department has selected Sumitomo-Mitsui Construction Co. Ltd. to build the rail line.

The 147-kilometer NSCR Project estimated to cost around PHP777.55 billion will have 36 stations from Clark International Airport to Calamba, Laguna.

The railway project will connect PNR Clark Phase 1 (Tutuban-Malolos) PNR Clark Phase 2 (Malolos-Clark) and the PNR Calamba Project which will run from Manila to Calamba.

Politiko would love to hear your views on this...
Post Views: 5
Spread the love
Tags: Arthur Tugade, DOTr, LRT-1, Malolos, Manila, Metro Manila Subway, MRT-3, MRT-7, NSCR, PNR, Tutuban
Disclaimer:
The comments posted on this site do not necessarily represent or reflect the views of management and owner of POLITICS.com.ph. We reserve the right to exclude comments that we deem to be inconsistent with our editorial standards.