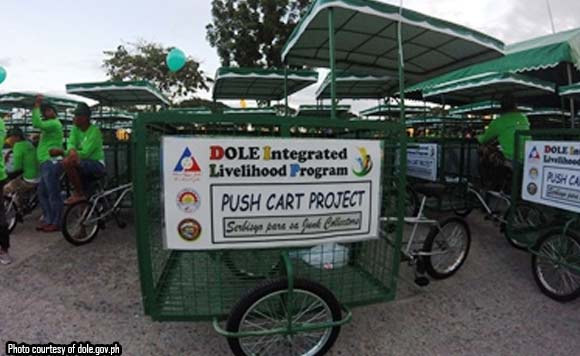 The success story of a poor mother in Bataan proves that one of the agency’s programs truly works.

In 2012, Juliet Abad from the town of Mariveles received a Negokart from the DOLE. It’s a simple gift she didn’t know then would give her sustainable livelihood.

Abad was a fiberglass factory worker when she resigned to pursue a street food business with her husband.

In less than a year, their earnings from Negokart helped them send their children to school. They bought a popcorn cart and opened a small food kiosk in the annual trade fair inside the Freeport Area of Bataan.

Now they operate a bigger kiosk with an expanded menu.

DOLE’s regional and field offices can be reached through contact numbers listed on its official web http://ro3.dole.gov.ph. The public may also visit the nearest Public Employment Service Offices in different parts of the region.

Politiko would love to hear your views on this...
Tags: Bataan, DOLE, fiberglass factory, food kiosk, Freeport Area of Bataan, Juliet Abad, Mariveles received a Negokart
Disclaimer:
The comments posted on this site do not necessarily represent or reflect the views of management and owner of POLITICS.com.ph. We reserve the right to exclude comments that we deem to be inconsistent with our editorial standards.