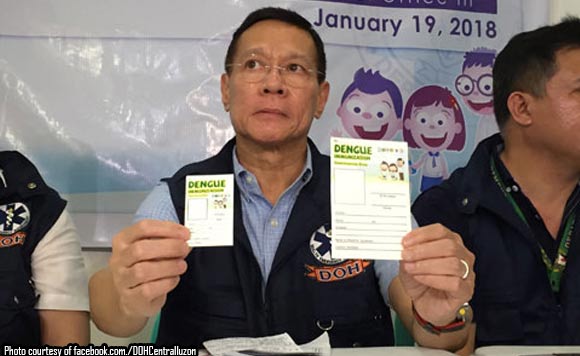 The Department of Health (DOH) implemented a monitoring and surveillance program for the recipients of the Dengvaxia vaccine in San Fernando City, Pampanga province.

During the Provincial Dengue Summit held in the city, Health Secretary Francisco Duque III led the launching of the Dengue Immunization identification cards, in light of the controversial dengue vaccine from French pharmaceutical company Sanofi.

DOH Regional Director for Central Luzon Leonita Gorgolon said the ID system will help track any adverse effect experienced by children who received doses of Dengvaxia. The ID cards are also being distributed in other parts of Central Luzon, Calabarzon, Metro Manila and Cebu.

According to the DOH, the system has two types of cards: one for parents and the other for the children.

“Both cards contain basic information about the recipient of the vaccine including his/her name, grade level, gender, name and contact number of his/her parent or guardian as well as the number of doses received and the date he/she received each dose,” said Gorgolon.

The ID also contains hotline numbers, information and interventions parents can use in case a child a child manifests symptoms of dengue.

Gorgolon said parents must then present the ID to the health facility to inform healthcare providers that the child received the vaccine, so that he or she will be given priority.

“For the mothers, we are giving them IDs as well because there are instances when mothers go to health facilities claiming that their child was vaccinated with Dengvaxia. In fact, there is one instance when a parent granted an interview with the media, but when we verify it, that parent is not in the master list of beneficiaries. So these are some of the issues that we want to address,” she added.