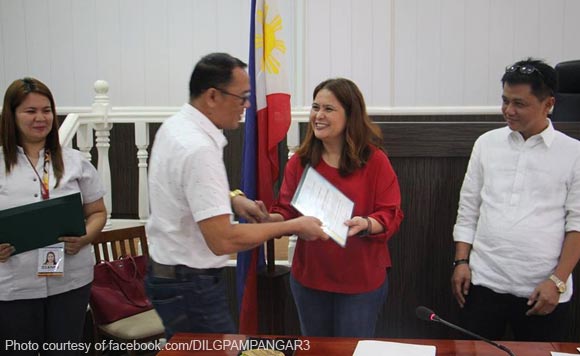 The Department of Interior and Local Government (DILG) Pampanga has honored the Liga ng mga Barangay (LnB) Chapter presidents in the province for being its partner in implementing its programs down to the grassroots level.

DILG Provincial Director Myrvi Apostol-Fabia led the awarding of certificates of appreciation to the local and provincial LnB chapter presidents in a recent ceremony.

The official said it was the DILG Pampanga’s simple way of saying thank you to the chapter officials for their “unquestionable support to the Department in translating national efforts and programs down to the grassroots level.”

Politiko would love to hear your views on this...
Spread the love
Tags: Department of Interior and Local Government), DILG Pampanga, DILG Provincial Director Myrvi Apostol-Fabia
Disclaimer:
The comments posted on this site do not necessarily represent or reflect the views of management and owner of POLITICS.com.ph. We reserve the right to exclude comments that we deem to be inconsistent with our editorial standards.