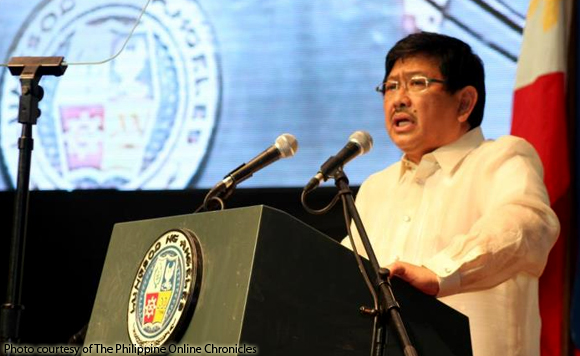 While he threatened to have mayors implicated in the illegal drugs trade killed, President Rodrigo Duterte at least made it clear that he has no plans to declare martial law in a bid to contain his drug-bogey man menace.

This was disclosed by Angeles City Mayor Edgardo Pamintuan, one of the 1,000 mayors from Luzon, Visayas, and Mindanao who attended the Rizal Hall,Malacañang meeting January 11.

The closed door meeting with the local executives, who all did not talk back, lasted for some four hours.

The politiko said the President told them he had no plans of declaring martial law, calling it “circuitous and difficult.”

Pamintuan also remembered Duterte as saying: “Help me fight the menace … Those who are involved and are in this thick set of papers, show me you are not …. Don’t fool me …. Come clean and fight drugs otherwise you will incur my ire.”

Politiko would love to hear your views on this...
Post Views: 0
Spread the love
Tags: Angeles City Mayor Edgardo Pamintuan, Malacanang, president Rodrigo Duterte
Disclaimer:
The comments posted on this site do not necessarily represent or reflect the views of management and owner of POLITICS.com.ph. We reserve the right to exclude comments that we deem to be inconsistent with our editorial standards.