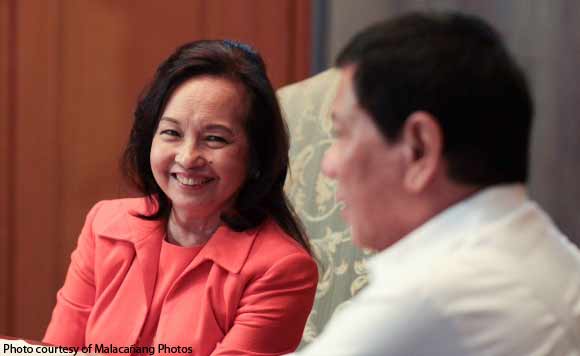 In a statement March 15, the lady politiko said that while she supports President Duterte and Speaker Pantaleon Alvarez, the contentious measure reviving the death penalty requires a conscience vote and the “deepest of personal convictions”.

The Pampanga solon also expressed gratitude to the President for understanding her stance on the issue. She likewise thanked Alvarez for the “honor of having served as Deputy Speaker” in the lower chamber.

”As a plain Congresswoman I will continue to do all I can to support both President Duterte and Speaker Alvarez,” she added.

Alvarez followed through with his hard-line policy of stripping anti-death penalty lawmakers of their leadership titles as Majority Floor Leader Rodolfo Fariñas declared vacant the posts of Arroyo and eleven other committee chairmen who voted against the death penalty bill.

Politiko would love to hear your views on this...
Post Views: 0
Spread the love
Tags: death penalty bill, Majority Floor Leader Rodolfo Fariñas, Pampanga 2nd District Rep. Gloria Macapagal-Arroyo, president Rodrigo Duterte, Speaker Pantaleon Alvarez
Disclaimer:
The comments posted on this site do not necessarily represent or reflect the views of management and owner of POLITICS.com.ph. We reserve the right to exclude comments that we deem to be inconsistent with our editorial standards.