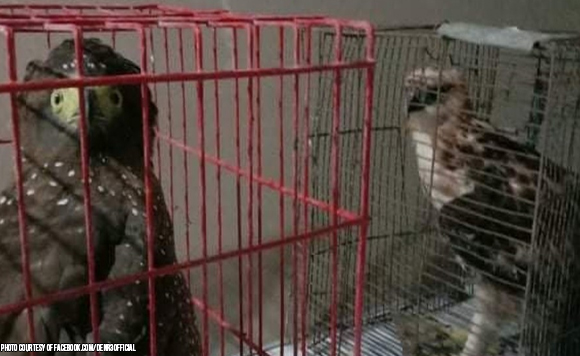 According to Dennis Vergara, head of CENRO Baliwag, a changeable hawk eagle (Nisaetus cirrhatus) was rescued by the DENR’s wildlife enforcement team after a concerned citizen reported it to the local government of San Ildefonso in Bulacan.

The bird was trapped in a pile of grass in a rice field in a village in San Ildefonso, according to a DENR report on November 16.

The LGU then called CENRO Baliwag to rescue the raptor.

Meanwhile, a crested serpent eagle (Spilornis cheela) was also turned over by another concerned citizen in CENRO Baliwag
The raptors are now in the custody of the wildlife rescue center of the DENR-Biodiversity Management Bureau (BMB) in Quezon City to undergo care and rehabilitation, after which it will be released back to the wild.

In Central Luzon, these raptors can be found in the forested area of Bulacan and Aurora, according to the DENR.

Politiko would love to hear your views on this...
Spread the love
Tags: Baliwag, Bulacan, Community Environment and Natural Resources, Department of Environment and Natural Resources, Nisaetus cirrhatus
Disclaimer:
The comments posted on this site do not necessarily represent or reflect the views of management and owner of POLITICS.com.ph. We reserve the right to exclude comments that we deem to be inconsistent with our editorial standards.