Dengue cases in Angeles City down by 61% in June – CHO 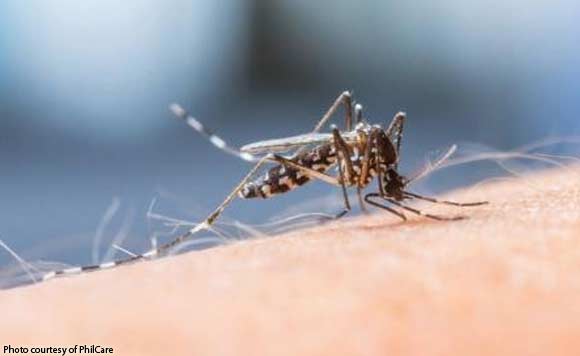 Dengue cases in Angeles City fell by 61 percent year-on-year in June due to the city’s intensified campaign against the deadly disease, the City Health Office (CHO) said.

City Health Officer Dr. Lenario Santos said there were 127 dengue cases in June, lower than the 327 cases reported a year ago.

His office through the Anti-Dengue Task Force Group has been undertaking regular misting operations in the 33 barangays and public schools of Angeles City, he said.

The launching of a Barangay Anti-Dengue Task Force in every villages has helped in educating residents on how to prevent dengue, he added.

Meanwhile, Mayor Edgardo Pamintuan reminded the Angeleños to maintain the cleanliness in the community, most especially in their households to avoid these infections.

He underscored the importance of Department of Health’s (DOH) anti-dengue advocacy drive summarized as 4S: search and destroy, self protection, seek early consultation, and say ‘No’ to indiscriminate fogging.

Dengue is a fatal mosquito borne-disease mainly affecting children. It is common in tropical countries and has been a nationwide concern in the Philippines.

Politiko would love to hear your views on this...
Post Views: 1
Spread the love
Tags: Angeles City, Barangay Anti-Dengue Task Force, City Health Office (CHO), dengue, Department of Health’s (DOH), indiscriminate fogging, operations, Philippines, tropical countries
Disclaimer:
The comments posted on this site do not necessarily represent or reflect the views of management and owner of POLITICS.com.ph. We reserve the right to exclude comments that we deem to be inconsistent with our editorial standards.