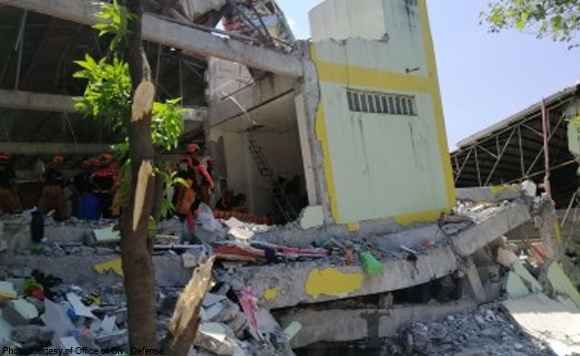 MANILA — The death toll in the magnitude 6.1 earthquake that rocked parts of Luzon on Monday has reached 16, the National Disaster Risk Reduction and Management Council (NDRRMC) announced Tuesday.

In a statement released by NDRRMC executive director Ricardo Jalad, around 81 persons have been reported injured while 14 remain missing.

All of these are reported in Central Luzon.

Of the 16 reported dead, five were from the collapsed Chuzon Supermarket in Porac, seven from different barangays in the town, two in Lubao, one in Angeles City, and one in San Marcelino, Zambales.

These figures are subject to further validation by authorities.

A total of 29 structures and buildings sustained damages due to the earthquake.

NDRRMC has raised its ‘blue alert status’ since 7 p.m. last Monday and has issued a memorandum directing regional DRRMCs to raise their alert status and to continuously monitor their Areas of Responsibility (AOR).

All duty personnel with their municipal fire marshal conducted roving, monitoring, and coordination with MDRRMO, Philippine National Police, local government unit and other government agencies within their respective areas of responsibility.

A total of 155 Bureau of Fire Protection personnel with rescue trucks, fire trucks, and ambulance in Pampanga assisted in rescue and response operations. Some 138 PNP, 140 MDRRMO, and 90 Armed Forces of the Philippines personnel are likewise providing assistance.

Equipment such as backhoes, jackhammers, hydraulics, and cranes were used in order to speed up the said operation.

As per the Department of Energy, Petron Corporation conducted protective tripping of some units of its refinery. Also per National Grid Corporation of the Philippines, Meralco dispatched two Canter vehicles and four generator sets with eight floodlights to Porac, Pampanga.

Meanwhile, the Philippine Institute of Volcanology and Seismology (Phivolcs) continues to disseminate earthquake information updates and has been continuously monitoring significant earthquake activity and development.

Meanwhile, the NDRRMC also responded to reports of an earthquake-induced landslide in Mt. Bimmukel in San Marcelino, Zambales.

Approximately 120 families have been evacuated and have already been provided relief packs.

Schools and government work in affected areas were suspended to give way to the inspection of all structure damages and rescue operations.

The public is advised to be aware of the aftershocks, stay calm, familiarize the evacuation plan in your area and keep posted on the latest and verified updates about earthquake information. (PNA)

Politiko would love to hear your views on this...
Spread the love
Tags: Angeles City, Areas of Responsibility (AOR), Bureau of Fire Protection, Central Luzon, Chuzon Supermarket, Department of Energy, Luzon, Metropolitan Manila Development Authority (MMDA, National Disaster Risk Reduction and Management Council (NDRRMC), Petron Corporation, Philippine Institute of Volcanology and Seismology (Phivolcs), Ricardo Jalad
Disclaimer:
The comments posted on this site do not necessarily represent or reflect the views of management and owner of POLITICS.com.ph. We reserve the right to exclude comments that we deem to be inconsistent with our editorial standards.