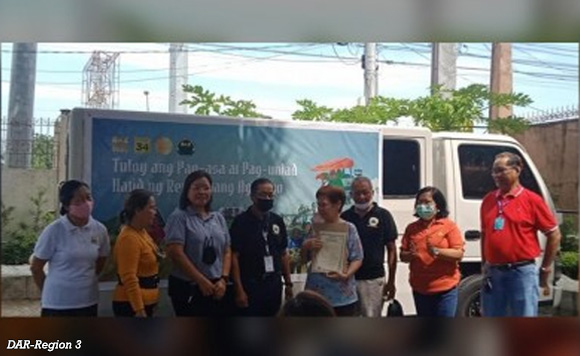 Under the agency’s Support to Parcelization of Lands for Individual Titling (SPLIT) Project, officials hope to speed up land subdivision or parcelization of the Collective Certificates of Land Ownership Award (CCLOAs) of about 1.368 million hectares of land nationwide.

According to a Philippine News Agency report, Project SPLIT team leader Sylvia Sangbaan said on Thursday that a total of 17 hectares of land were distributed in Bulacan to 13 ARBs.

Under the SPLIT project, she said the DAR would parcelize the awarded lands covered by a CCLOA.

“This means that each farmer-beneficiary would be given an individual land title based on the actual area or a particular portion of the land he or she is tilling,” the report said.

Politiko would love to hear your views on this...
Spread the love
Tags: agrarian reform beneficiaries (ARBs), Bulacan, Department of Agrarian Reform (DAR)
Disclaimer:
The comments posted on this site do not necessarily represent or reflect the views of management and owner of POLITICS.com.ph. We reserve the right to exclude comments that we deem to be inconsistent with our editorial standards.