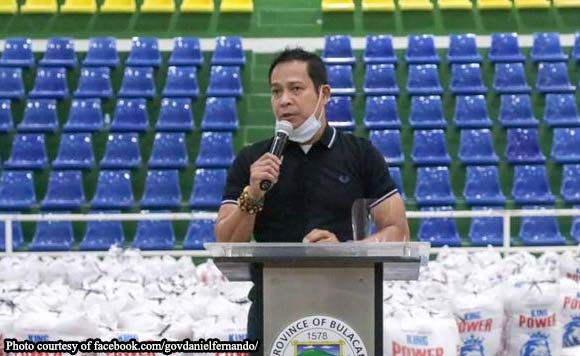 CITY OF MALOLOS, Bulacan – The Department of Health (DOH) has recognized the provincial government of Bulacan for its successful “Sabayang Patak Kontra Polio” campaign that recorded 647,272 children given with anti-polio drops.

On behalf of the provincial government, Governor Daniel Fernando received the certificate of appreciation from Dr. Emily Paulino of the DOH-Bulacan on Thursday for the high coverage of the province’s anti-polio drive despite having a high number of coronavirus disease 2019 (Covid-19) cases.

Fernando credited the success of the campaign to the proactive efforts of the provincial government of Bulacan, including its health education and promotion, partnership with private pediatrician organizations, and the service of the health workers.

“Sa gitna ng pandemya, nakikita natin ang kahalagahan ng bakuna. Wala pa po tayong kaso ng polio dito sa ating lalawigan kaya naman po nararapat na paghandaan natin ito. Gumawa na po tayo ng hakbang upang makaiwas at proteksyunan ang buong lalawigan laban sa sakit na ito (In the midst of the pandemic, we see the importance of the vaccine. We do not yet have a case of polio here in our province so we should prepare for it. We have already taken steps to prevent and protect the entire province against this disease,” he said.

He added the oral vaccine is free, safe, and proven effective against polio.

Polio is a contagious disease that can cause paralysis and may even result in death. It usually targets children under five years old. (PNA)

Politiko would love to hear your views on this...
Post Views: 3
Spread the love
Tags: anti-polio, Bulacan, coronavirus, Department of Health (DOH), Governor Daniel Fernando, Sabayang Patak Kontra Polio
Disclaimer:
The comments posted on this site do not necessarily represent or reflect the views of management and owner of POLITICS.com.ph. We reserve the right to exclude comments that we deem to be inconsistent with our editorial standards.