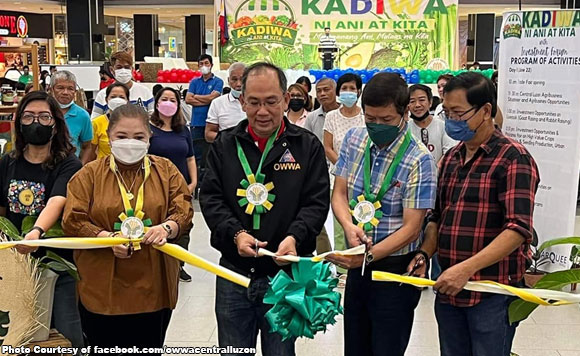 An agri-trade fair organized by the Department of Agriculture (DA) will be held in Angeles City from June 22 to 24.

The DA KADIWA ni Ani at Kita three-day Trade Fair is being held at Marquee Mall featuring small and medium enterprises and farmers from the provinces of Aurora, Bataan, Bulacan, Nueva Ecija, Pampanga, Tarlac and Zambales.

According to a Philippine Information Agency report, farmers are expected to showcase their champion commodities, delicacies, and services proudly locally made at their most affordable prices.

“In this leg, we have tied up with the Overseas Welfare Workers Administration for the conduct of the Investment Forum whereby our OFWs are the main audience of agribusiness opportunities to be discussed by experts,” the DA said in a statement.

The program is a market system that sells major agricultural goods at reasonably low prices to help poor Filipino households.

Kadiwa is loosely translated as “one idea, one thought” which is in consonance with Agriculture Secretary William Dar’s “New Thinking” for Agriculture paradigm, according to the report.

Politiko would love to hear your views on this...
Spread the love
Tags: Angeles City, Aurora, Bataan, Bulacan, Department of Agriculture, Kita three-day Trade Fair, Nueva Ecija, Pampanga, Tarlac, Zambales
Disclaimer:
The comments posted on this site do not necessarily represent or reflect the views of management and owner of POLITICS.com.ph. We reserve the right to exclude comments that we deem to be inconsistent with our editorial standards.