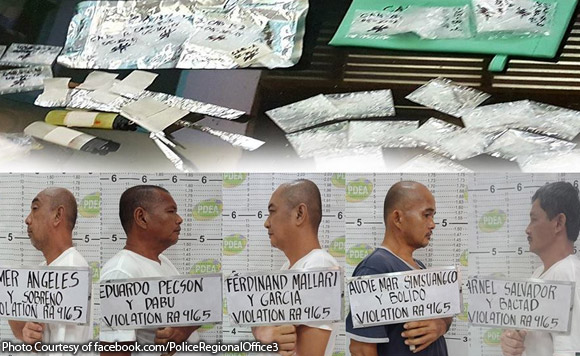 Anti-narcotics agents have arrested five individuals and confiscated P800,000 worth of illegal drugs during the implementation of a search warrant in Bataan.

Operatives from the Bataan police and the Philippine Drug Enforcement Agency (PDEA) raided No. 17, Barangay Rizal, Dinalupihan, Bataan on May 30.

Confiscated from the suspects were 28 pieces of heat sealed transparent plastic sachets containing white crystalline substance suspected to be shabu, weighing around 120 grams amounting to P800,000.

“This is another huge accomplishment of our anti-illegal operatives and the PDEA who have pursued the leads relentlessly and followed the legal processes that resulted in the raid and seizure of the illegal drugs,” said Police Regional 3 Director Chief Supt. Amador V. Corpus.

The suspects were charged for alleged violation of the Comprehensive Dangerous Drugs Act of 2002.

Politiko would love to hear your views on this...
Post Views: 1
Spread the love
Tags: Barangay Rizal, Bataan, Chief Supt. Amador V. Corpus, Comprehensive Dangerous Drugs Act, Dinalupihan, illegal drugs, P800000, Philippine Drug Enforcement Agency (PDEA), violation, warrant
Disclaimer:
The comments posted on this site do not necessarily represent or reflect the views of management and owner of POLITICS.com.ph. We reserve the right to exclude comments that we deem to be inconsistent with our editorial standards.