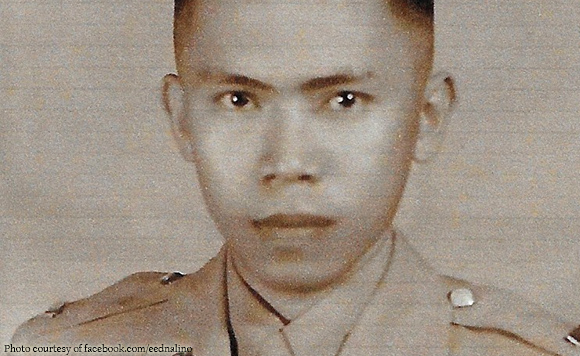 Some Philippine heroes may not be as known to the general population as those specifically from the era of Jose Rizal and Andres Bonifacio, or from within the last two decades.

But the late Army Capt. Conrado Yap, a native of Candelaria, Zambales, deserves to share the space in every Filipino’s mind and heart where the likes of Rizal, Bonifacio, and Gregorio del Pilar, among many of our distinctly courageous ancestors, have long been immortalized.

Hailed for his heroic act in the 1950s during the Korean War, Yap is among those recognized to have contributed to the immense development of South Korea now. Some accounts say he also fought during the Battle of Bataan during the Japanese occupation of the Philippines, and even survived the infamous Death March.

A graduate of the Philippine Military Academy Class of 1943, Yap was part of the nearly 7,500-strong Philippine Expeditionary Task Force to Korea, under the United Nations Command, when the Korean War broke out in June 1950.

In a newspaper column published last year, South Korea Ambassador to the Philippines Han Dong-man noted that “the Philippines was the first Asian country to join a United Nations coalition to support South Korea’s efforts to repel the northern invaders, and Capt. Yap was one of the first officers deployed to Korea.”

Yap, then married with three very young daughters left in the Philippines, served as Commander of the Tank Company, 10th “Steady On” Battalion Combat Team (Motorized) of the PEFTOK.

The battalion, according to South Korea’s Ministry of Patriots and Veterans Affairs (MPVA), participated in the war from September 1950 until September 1951. The other Philippine units, in varying periods, took part from April 1951 through May 1955.

Yap’s valor was tested and proven during the Battle of Yuldong on April 22-23, 1951, said to be one of the decisive battles in the Korean War. This, according to South Korea’s MPVA, “was the battle in which the Filipino 10th Battalion Special Force, after being attached to the U.S. 3rd Division, fought against the Chinese Communist 34th Division at Yuldong, north of Yeoncheon.”

“While attempting to recover and rescue his fallen comrades, after he and his men had secured a strategic location that restored the Filipino front line and saved the lives of hundred of U.N. Command soldiers,” Yap was killed by enemy fire on April 23, 1951, Amb. Han wrote in his column.

In one account, it was said that when Yap learned that his First Platoon was overrun, and its leader, 1Lt. Jose M. Artiaga of PMA Class of 1944, who happened to be his best friend, was mortally wounded, “he fearlessly led a daring charge in a determined effort to reach the beleaguered platoon.”

Defying his battalion commander’s orders to withdraw, and “the overwhelming enemy strength and heavy fire received from flank and to the front, his troops relentlessly pressed the assault, regained the hill, evacuated the casualties, and rescued the isolated unit,” the account said.

“Observing a stricken soldier on the slope of the hill, Captain Yap immediately started to rush toward the man, but was mortally wounded by a burst of enemy fire,” it added.

In a separate column, also last year, Amb. Han of expressed his belief that “veterans,” with particular reference to those who defended his country’s freedom during the Korean War, “deserve the title of hero.”

“There is no doubt that the Republic of Korea will not be enjoying peace, democracy and economic prosperity today without the noble and great sacrifice of Filipino Korean War veterans,” Han wrote.

South Korea’s MPVA recorded a total of 490 casualties from the Philippine contingent during the Korean War, including 116 killed-in-action, 313 wounded-in-action, and 61 missing-in-action and prisoners-of-war.

During the 65th anniversary in July last year of the signing of the Korean Armistice Agreement, which ended the three-year tragic war, South Korea honored Yap with the highest recognition for military bravery and valor, the First Class Taegeuk Cordon of the Order of Military Merit. His second daughter, Isabelita Yap-Aganon, received the award.

“My father’s death is not in vain, because, the way I look at Korea now, it has progressed so much. It is really amazing,” Isabelita said in an interview at the time, aired on Arirang News.

Yap had much earlier been posthumously awarded the Congressional Medal of Valor by the Philippine government, and the Distinguished Service Cross by the United States government.

“With the realization that you will no longer come back to us physically, the only consolations Mom had were the honors that were bestowed on you,” Isabelita said in her remarks during the commemoration of the 65th anniversary of the Battle of Yuldong in April 2016, at the Libingan ng mga Bayani, a copy of which was shared on the Facebook page of the Philippine Veterans Affairs Office.

“You earned both of these honors in the Korean War, fighting for democracy and for sacrificing your life beyond the call of duty. We are so proud of you. And we, your children, try to live up to that precious heritage you left us in our small ways,” she added.

The U.S. citation on Yap said his “display of courage, devotion to duty, and inspiring leadership reflect the highest credit on himself and the Army of the Republic of the Philippines.”

To immortalize the legacy of Yap, especially within the military, a number of physical structures have been named after him, including the PMA Mess Hall in Baguio City, and another building at Camp O’Donnell in Capas, Tarlac.

The Philippine Navy named after him a fleet of patrol boats from South Korea in 1993, but has since been decommissioned in 2018.

A recent Philippine News Agency report said a newly donated Pohang-class corvette that the Philippine Navy will receive from South Korea will also be named after Yap.

In military doctrines and lectures, both for cadets and those already in the active service, Yap’s experience is also cited when the topic touches on valor.

In Candelaria, a statue of Yap is currently being erected at the town plaza, fronting the municipal library, and it is expected to be completed in a few months.

The municipal library is also being considered to be named after him.

And, beginning last year and every year thereafter, April 23 is celebrated in Candelaria as “Captain Conrado D. Yap’s Day,” which the municipal council declared as “Special Non-Working Holiday” in the entire municipality.

Candelaria Municipal Ordinance No. 09, Series of 2017, states, “It is the purpose of this Ordinance to honor and remember the heroism of the late Captain Conrado D. Yap, our town mate, a Filipino hero who died in action during the Korean War (on) April 23, 1951 at a very young age of 30.”

“This yearly celebration of his death will instill (in) the hearts of every Candelarians that our town had produced (a seat) a hero in the name of Captain Conrado D. Yap,” it added.

The said ordinance requires the Department of Education “to integrate in their Araling Panlipunan, Social and History the life of heroism” of Yap.

“The municipal library will be provided with reading and reference materials for this purpose,” it said.

In her 2016 remarks (which came in the form of a letter to his father) during the 65th anniversary of the Battle of Yuldong, Isabelita said, “Pa, I am just trying to tell you that your death was not in vain because Korea now has a lot to show to the world. They have picked themselves up after the war, where you gallantly fought, and they have progressed phenomenally as a nation.”

In a similar acknowledgement of the impact of Yap’s cross-country display of valor, South Korean Amb. Han wrote, “Without a doubt, Korea would not be the nation that it is today – progressive, motivated, with a strong economy and stable democracy – without the blood sacrifice of valiant soldiers like the PEFTOK veterans, heroes like Capt. Conrado Yap.”(END)