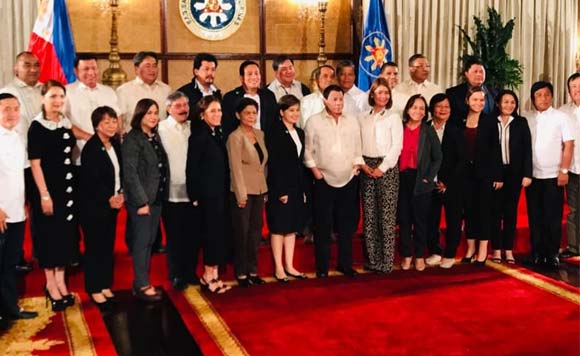 Several politikos from Central Luzon, ranging from congressmen to mayors, gathered on Thursday night in Malacanang for a dinner with President Rodrigo Duterte.

Photos shared by Nueva Ecija 1st District Representative Estrellita Suansing on her Facebook account showed that House Speaker Gloria Macapagal-Arroyo, who represents Pampanga 2nd District in Congress, led the group of politicians in what appears to be a private dinner gathering with the chief executive.

There was no mention of the agenda or the topics discussed.

Facebook posts of other officials also showed that Governors Amor Deloso of Zambales, Cherry Umali of Nueva Ecija, Albert Garcia of Bataan, Wilhelmino Sy-Alvarado of Bulacan, and Lilia Pineda of Pampanga were present, along with some vice governors.

The administration’s senatorial bets for the May elections kicked off their campaign in Central Luzon beginning Feb. 12.