Dipaculao villagers asked to be cautious after ‘killer shark’ sighting 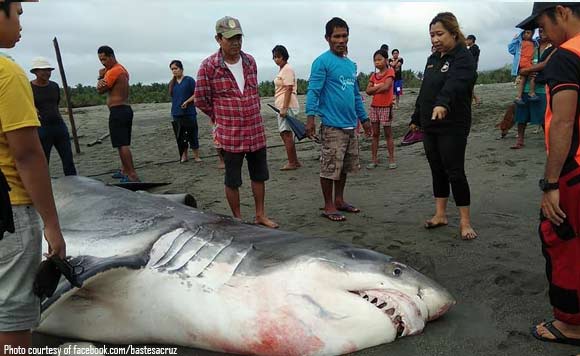 The Municipal Disaster Risk Reduction and Management Council (MDRRMC)
warned village officials to take precautionary measures in light of
this discovery, especially since they are still confirming whether
there are other “killer sharks” present in the area.

Arturo Molina, MDRRMC chief, said they have reminded all coastal
village chiefs to be watchful in their respective barangays. Deep
fishing activities are also discouraged by the office, until the
Bureau of Fisheries and Aquatic Resources (BFAR) declares no sightiing
or presence of the killer shark in the Aurora waters, through an
official announcement.

“We are now consulting with the BFAR if there is indeed a possibility
that the dead shark found in the shoreline could have had with a flock
of sharks.”

According to authorities, no marking of severe wounds has been traced
in the flesh of the 16.7-foot long shark. The shark was immediately
buried to avoid further contamination.

This was the first time that a killer shark was found along
Dipaculao’s shoreline.

Politiko would love to hear your views on this...
Spread the love
Tags: Arturo Molina, Aurora province, Barangay Lob-bot, Bureau of Fisheries and Aquatic Resources (BFAR), coastal, Dipaculao town, MDRRMC chief, Municipal Disaster Risk Reduction and Management Council (MDRRMC), white shark
Disclaimer:
The comments posted on this site do not necessarily represent or reflect the views of management and owner of POLITICS.com.ph. We reserve the right to exclude comments that we deem to be inconsistent with our editorial standards.