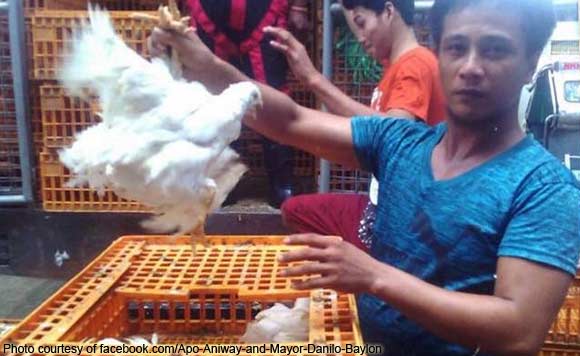 Some 8,000 live broiler chickens worth at least P1.6 million were distributed on Friday for free to the residents of Barangay Bahay Pare in this town, at no cost to the municipal government.

Mayor Danilo Baylon said the broiler chickens were healthy, safe to eat and free from any virus.

He said the distribution was part of the thanksgiving and regular sharing of “love and charity” of Danway Missionaries led by his wife, Aniway Baylon.

Baylon’s wife told the beneficiaries: “More than these material blessings, we want to share the blessings of the word of God,” she said.

“I want the people of Candaba to completely recover morally and spiritually, hence, any form of gambling especially during fiestas is not allowed in this municipality,” he said.

Baylon urged the people to report directly to his office any form of anomalies and irregularities committed by any employee and official of the municipal government. (PNA)

Politiko would love to hear your views on this...
Post Views: 0
Spread the love
Tags: Aniway Baylon, Barangay Bahay Pare, Danway Missionaries, Mayor Danilo Baylon
Disclaimer:
The comments posted on this site do not necessarily represent or reflect the views of management and owner of POLITICS.com.ph. We reserve the right to exclude comments that we deem to be inconsistent with our editorial standards.