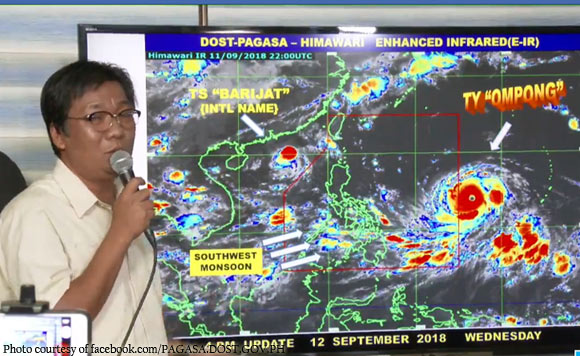 (UPDATED) Local politikos in Central Luzon are bracing for typhoon “Ompong” which is expected to directly hit the country’s main island of Luzon later this week.

Zambales Governor Amor Deloso on Wednesday declared suspension of classes at all levels in all schools in the province on Thursday and Friday.

In Pampanga, classes in Apalit, Sasmuan, Guagua, San Fernando City, and Mexico are suspended on Thursday. For the towns of Macabebe, Masantol, Minalin, Bacolor and Candaba, and Angeles City, classes on Thursday and Friday are suspended. And in Sta. Rita and Sta. Ana, there will be no classes from Thursday through Saturday.

Some areas in Bulacan also took the same measures. Calumpit Mayor Jess De Jesus declared suspension of classes on Thursday, as did the Malolos City government. Bocaue Mayor Joni Villanueva advised her constituents to standby for updates from the local government as she warns that her town is expected to experience cloudy with occasional rainshowers and thunderstorms on Thursday.

Villanueva said the municipal disaster risk reduction and management council convened Wednesday for pre-disaster risk assessment, and Operation Listo to prepare and pre-position all required logistics for any eventualities.

In Tarlac province, Concepcion Mayor Andy David Lacson initiated an emergency meeting to prepare for the typhoon. Classes in Ramos town have been suspended on Thursday and Friday, according to the office of Mayor Diosdado Reginaldo. The mayor of Bamban town suspended classes also on Thursday, as did Mayor Cristy Angeles for Tarlac City, and the mayor of Paniqui municipality.

Baler, Aurora Mayor Nelianto Bihasa suspended all tourism-related activities in his town on Sept. 14-16, including all kinds of water and mountain activities.

The city government of Gapan City in Nueva Ecija declared suspension of classes as well on Thursday.

The government weather bureau said “Ompong” may reach a peak intensity of 220 kilometers per hour in maximum winds, and gusts of up to 270 kph as it approaches the Philippine mainland on Thursday.

Already inside the Philippine area of responsibility as of Wednesday afternoon, Ompong is forecast to make landfall in the northern tip of Cagayan province on Saturday.(END)

Politiko would love to hear your views on this...
Spread the love
Tags: Bocaue Mayor Joni Villanueva, Mayor Diosdado Reginaldo, Zambales Governor Amor Deloso
Disclaimer:
The comments posted on this site do not necessarily represent or reflect the views of management and owner of POLITICS.com.ph. We reserve the right to exclude comments that we deem to be inconsistent with our editorial standards.