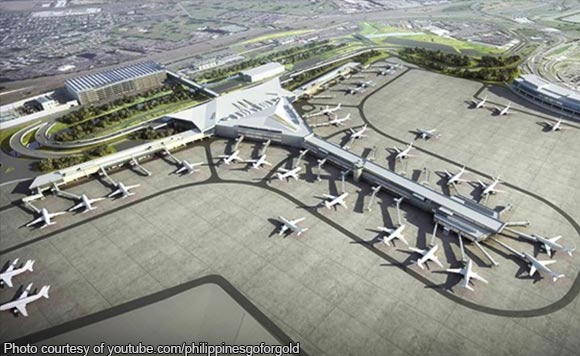 Requests for house blessings are on the rise in Bulakan, Bulacan just outside the future site of the “New Manila International Airport” as families displaced by the project begin moving into their new homes built by San Miguel Corp.

The Ramon Ang-led conglomerate, whose subsidiary will build the airport project, said it has finished early the construction of the house-and-lots for families who used to be settlers of Barangay Taliptip and were relocated, according to reports.

SMC has also distributed financial assistance to the former settlers, most of whom used to live in shanties and earned their living in private fish ponds that had long closed down.

According to Fr. Ramon Garcia, parish priest of Nuestra Senora de Salambao Mission Parish in Obando, some 16 new houses were blessed recently in Barangays Sta. Ana, Bambang, Tibig, and San Nicolas and other nearby areas in Bulakan town.

But he said he had to limit these due to restrictions brought on by the pandemic.

For the houses he has blessed so far, Garcia said that his key takeaway from new homeowners is their sense of gratitude.

SMC credited the Diocese of Malolos for its role in the successful relocation of the former Taliptip residents, who now faced better prospects for the future because of new job and livelihood opportunities provided by the company.

The company is investing some P740 billion to build the “game-changer” Manila International Airport project.

According to SMC, the diocese headed by Archbishop Dennis Villarojo interceded on the settlers’ behalf and communicated their wishes to the company.

“We promised Bishop Dennis Villarojo that we would prioritize helping Taliptip residents move to safer locations and have houses to call their own,” Ang said.

“We also said we would make sure they will have a better future. With guidance and support from Bishop Villarojo, we have been able to deliver on these promises, and we’re committed to continue taking care of residents from Taliptip,” he said.

After dialogues with residents, most preferred to receive financial aid in order to build their own houses, though SMC still provided relocation to titled house and lots in safer areas in Bulacan, for those who chose this option.

“Many have completed construction of their new houses. A good number of former settlers have also gone back to their provinces to build their houses and start anew there. Some have used part of the financial assistance to put up small businesses, or send their children to school. We are in touch with them and we continue to monitor their progress,” Ang said.

“We continue to seek the guidance of the good bishop in all our initiatives and we promise that we will continue to care for them and attend to their needs,” Ang said.

“Our support goes beyond financial assistance as we have launched skills and livelihood training programs in cooperation with TESDA to equip former Taliptip residents for jobs at the airport project, and to start their own livelihoods,” he added.

Villarojo, meanwhile, has instructed Garcia to continue attending to the needs of parishioners who have moved in other areas but are still within his parochial jurisdiction.

SMC also works with the Diocese of Malolos, through its Social Action Group, for the regular distribution of nutribuns to poor communities in Bulacan.

Politiko would love to hear your views on this...
Spread the love
Tags: Bulakan, financial assistance, New Manila International Airport, San Miguel Corp.
Disclaimer:
The comments posted on this site do not necessarily represent or reflect the views of management and owner of POLITICS.com.ph. We reserve the right to exclude comments that we deem to be inconsistent with our editorial standards.