Bulacan to shoulder funeral expenses of 5 fatalities in plane crash 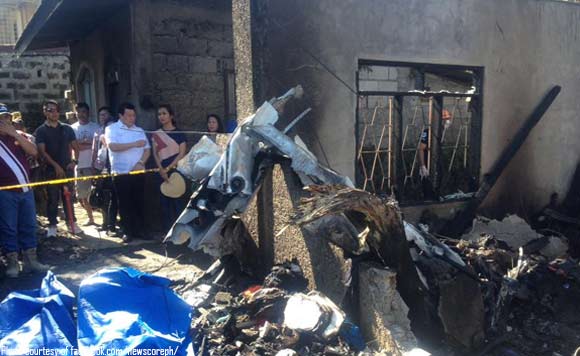 The provincial government of Bulacan will shoulder the cost of funeral services for the five family members who were killed when a light aircraft crashed into their house here on Saturday.

With their house a complete wreck, the wake for the victims was held at the chapel of Barangay Lumang Bayan here.

Noel dela Rosa, Rissa’s husband, and his two other children were not in the house when the plane crashed.

Felicisima Mungcal, head of the Provincial Disaster Risk Reduction Management Office (PDRRMO) of Bulacan, said: “The staff of the Provincial Social Welfare and Development Office will go back to the crashed area and give stress debriefing to all the affected residents of the village.”

Five persons on board the plane were also killed in the crash. They were identified as pilot, Capt. Ruel Meloria and his chief mechanic, Romeo Huenda; and passengers Alicia Necesario, Maria Vera Pagaduan and Nelson Melgar.

Virginia Marquez, 60, and Santino Yuri Salinas, 10, who were near the dela Rosa residence when the accident happened, sustained minor burns and were provided first aid by the Bulacan Rescue before being brought to the La Consolacion University General Hospital in Poblacion, Plaridel for treatment. They were later released after receiving medical attention. (PNA)