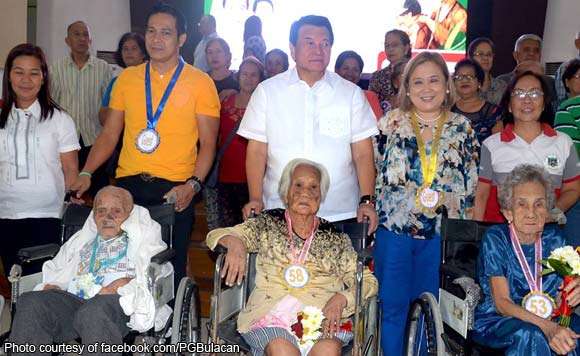 Bulacan Governor Wilhelmino Sy-Alvarado paid tribute early this week to the province’s elderlies, calling them “the light that guide the path of the youth.”

According to a statement from the provincial government, Sy-Alvardo believes that “if the youth is the hope of our nation, the elderlies are the light that guide the path of the youth.”

The provincial government gave P10,000 each to the 60 previously recognized and 30 newly-registered centenarians.

The new batch of 30 also got a plaque of recognition and appreciation, and will be provided each with P100,000 incentive from the Department of Social Welfare and Development.(END)

Politiko would love to hear your views on this...
Post Views: 0
Spread the love
Tags: Bulacan, Department of Social Welfare and Development, Governor Wilhelmino Sy-Alvarado, Vice Governor Daniel Fernando
Disclaimer:
The comments posted on this site do not necessarily represent or reflect the views of management and owner of POLITICS.com.ph. We reserve the right to exclude comments that we deem to be inconsistent with our editorial standards.