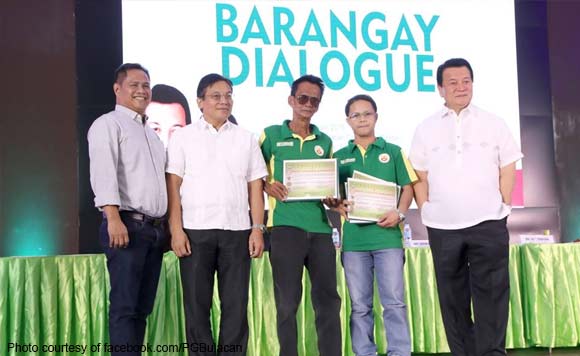 Bulacan Governor Wilhelmino M. Sy-Alvarado reiterated his call to the barangay officials in the province to strengthen cooperation with the government in addressing the illegal drug problem.

He made the call during the Barangay Dialogue, which was held at The Pavilion in Hiyas ng Bulacan Convention Center in Malolos City on Monday, April 23, and was attended by councilors and secretaries from the 569 villages in the province.

After the dialogue, Alvarado, along with the representatives from the Department of Interior and Local Government (DILG) and the Philippine Drug Enforcement Agency (PDEA), gave the “Certificates of Drug Cleared Barangay” to seven barangays in San Rafael, Bulacan including the villages of Paco, Maasim, Pasong Bangkal, Banca-banca, Dagat-dagatan, Pinac-pinacan and Diliman II. Prior to this, Brgy. Magmarale in San Miguel, Bulacan was firstly given the said certificate.

Alvarado urged the other village officials to also strive hard and be vigilant in promoting and implementing the anti-drug programs in order that their barangays would also be cleared of the narcotics problem.

Politiko would love to hear your views on this...
Spread the love
Tags: Banca-banca, Barangay Dialogue, Brgy. Magmarale in San Miguel, Bulacan, Bulacan Governor Wilhelmino M. Sy-Alvarado, Dagat-dagatan, Department of Interior and Local Government (DILG), Diliman II. Prior, e "Certificates of Drug Cleared Barangay, Hiyas ng Bulacan Convention Center in Malolos City, Maasim, Paco, Pasong Bangkal, Philippine Drug Enforcement Agency (PDEA), Pinac-pinacan, San Rafael
Disclaimer:
The comments posted on this site do not necessarily represent or reflect the views of management and owner of POLITICS.com.ph. We reserve the right to exclude comments that we deem to be inconsistent with our editorial standards.