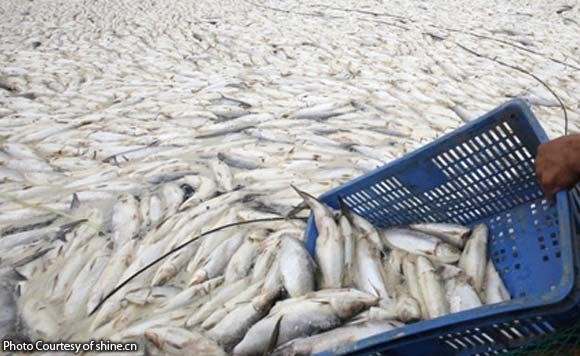 Fish pen operators in Obando, Bulacan have lost around P29 million due to the fish kill that hit their farms early this week.

In a statement Friday, the Bureau of Fisheries and Aquatic Resources (BFAR) of the Department of Agriculture (DA) said 130 hectares of milkfish farms in Obando was affected by the fish kill, resulting to 250-metric ton losses of milkfish stocks affecting 40 operators in seven villages.

The assessment was made by BFAR Region III and the local government unit, BFAR said.

Based on its investigation, BFAR said that the fish kill, which happened on noontime of May 6 was triggered by “unfavorable environmental factors particularly due to intense heat which registered at 34 degrees Celsius which coincided with low tide level at 0.050 meters.”

“Light rain showers, prolonged cloudy skies and thermal fluctuations in the water due to changing weather conditions have been found to be the causes of dissolved oxygen depletion which, in turn, caused the fish kill,” BFAR explained.

However, it said those factors were only aggravated by much higher than the BFAR recommended stocking rate of 3,000 fish per hectare by some of the fish pen operators.

The dead fish were properly disposed to ensure that they did not reach the market and cause public health-related concerns, BFAR said.

Despite the fish kill, it noted that there was no significant impact in the prices of bangus in the markets.

Politiko would love to hear your views on this...
Spread the love
Tags: BFAR Region III, Bulacan, Bureau of Fisheries and Aquatic Resources (BFAR), Department of Agriculture (DA), local government, milkfish farms, Obando, P29 million
Disclaimer:
The comments posted on this site do not necessarily represent or reflect the views of management and owner of POLITICS.com.ph. We reserve the right to exclude comments that we deem to be inconsistent with our editorial standards.