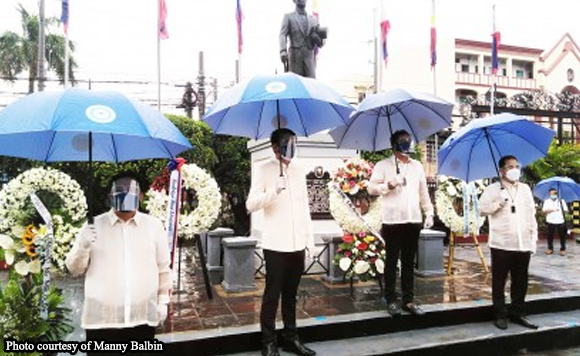 Bulacan province marked the 122nd anniversary of the opening of the Malolos Congress in simple rites led by Governor Daniel Fernando at the historic Barasoain Church.

Leading the ceremony were Fernando and Malolos City Mayor Gilbert Gatchalian, who made an offering of flowers at the statue of Emilio Aguinaldo who led the opening of the session of the Malolos Congress under his revolutionary government on September 15, 1898.

According to Fernando, the memory of the Malolos Congress should serve as an inspiration to the province’s current battle for the return to normality amid the coronavirus pandemic.

He said he wished for the return of freedom of movement and the people’s good health.

September 15 was declared a special nonworking holiday in the entire Bulacan province to observe the Malolos Congress anniversary.

Fernando signed an order declaring the nonworking day under Proclamation 1013.

Politiko would love to hear your views on this...
Spread the love
Tags: .Malolos Congress, 122nd anniversary, Barasoain Church, Daniel Fernando
Disclaimer:
The comments posted on this site do not necessarily represent or reflect the views of management and owner of POLITICS.com.ph. We reserve the right to exclude comments that we deem to be inconsistent with our editorial standards.