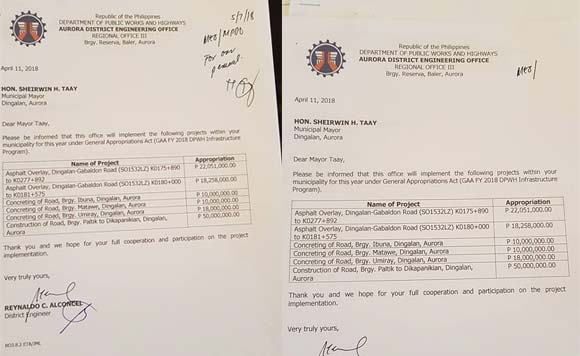 Dingalan Mayor Shierwin Taay is over the moon that several crucial infrastructure projects will be finished during his term.

The politiko posted photos of two letters written to him by the Auroro District Engineering Office, saying several asphalt overlay and concreting of roads projects will be implemented through the 2018 General Appropriations Act.

Politiko would love to hear your views on this...
Spread the love
Tags: Auroro District Engineering Office, Dingalan, Dingalan Mayor Shierwin Taay, Infra projects, several crucial infrastructure projects
Disclaimer:
The comments posted on this site do not necessarily represent or reflect the views of management and owner of POLITICS.com.ph. We reserve the right to exclude comments that we deem to be inconsistent with our editorial standards.