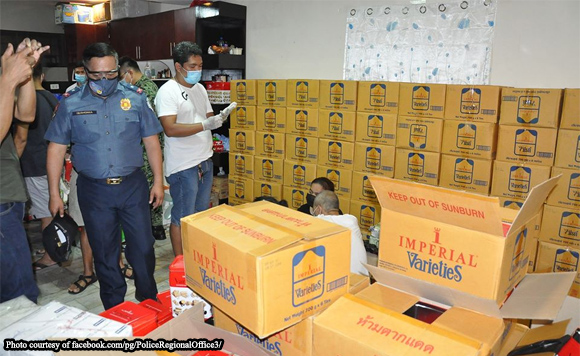 Members of the Philippine National Police-Drug Enforcement Group (PNP-DEG) arrested a Chinese national and his two cohorts and seized around P5.1 billion shabu in a buy-bust operation in Marilao, Bulacan on Thursday.

Members of the special operations unit of the PNP-DEG together with the Marilao police and the Bulacan Police Provincial Office arrested the suspects during the buy-bust operation at a warehouse along Reley Street in Barangay Lias around 3 p.m.

Seized from the suspects were 63 boxes containing 756 kilos of shabu with a street value of P5.140 billion and boodle money worth P1 million.

Gamboa said they are now looking into the profile of the Chinese suspect.

“As I have said, we have a link diagram and I cannot divulge anything because we still have to make traces and from here, you can pick up a lot of personalities and ideas how they do it and then from there, the police will work on it,” Gamboa told reporters in Filipino in a press conference at the site of the operation.

He said the Chinese man could be a “trusted man” of a bigger drug personality.

Gamboa said with the packaging, “we believe that these are importation because we believe, and even PDEA believes that there are no longer big laboratories in the country”.

“What we have here are kitchen-type [laboratories] which can produce approximately five to seven kilos of shabu every week. With more than 700 kilos, imagine how many weeks they can do that,” he added.

Gamboa also said the packaging itself does not suggest that the substance was made in a kitchen-type laboratory. He said the packaging contains Japanese characters, which he said, could be a deviation from the actual origin of the illegal drugs.

Given the huge quantity of the illegal drugs, he said the shabu may also have been meant for distribution in the Visayas and Mindanao.

An investigation is underway to determine the extent of the network of the suspect and bring to justice all possible cohorts.

DEG director, Brig. Gen Romeo Caramat Jr., said the suspects are now under the custody of the DEG and are set to face charges for violation of Republic Act 9165 or the Comprehensive Dangerous Drugs Act of 2002.
(PNA)

Politiko would love to hear your views on this...
Post Views: 1
Spread the love
Tags: Angela Miole Tulio, Archie Gamboa, Barangay Lias, Bulacan, Chinese national, Philippine National Police-Drug Enforcement Group, Reley Street, shabu
Disclaimer:
The comments posted on this site do not necessarily represent or reflect the views of management and owner of POLITICS.com.ph. We reserve the right to exclude comments that we deem to be inconsistent with our editorial standards.