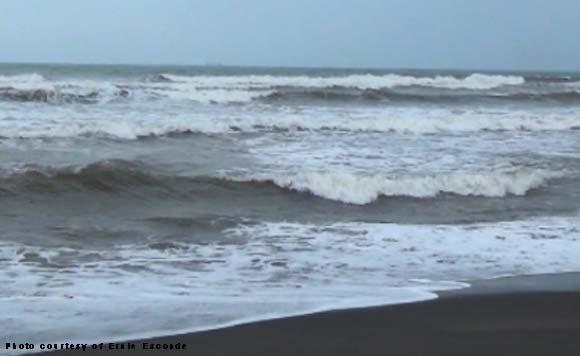 BAGAC, Bataan — Big waves have affected the livelihood of fishermen for a week now while most beach resorts along the West Philippines Sea here are almost empty or with few visitors on Saturday.

Bancas used for fishing and rental of tourists are placed on higher ground and some inside resorts in barangay Pag-asa where rows of beach resorts are located.

Daddy’s Beach House has been empty since the owner refused guests in the resort.

Some visitors are still in some cottages at Morning Breeze, Fajardo’s and other resorts but said they would only have a picnic but not to swim.

The strong waves have also caused the usual wide sandy beaches to be narrow, which the residents said will return to its former condition during the summer months.

Fisherman Jose Garcia said they are not able to fish for a week now because of big and strong waves.

Garcia said the waves were more turbulent last Thursday that entered some cottages in the resorts and destroyed portions of bamboo fences.

He said they were able to place their bancas and “bubo” that they use to catch squid in the higher grounds before the big waves struck.

Some bancas were also destroyed by the waves in the villages of Biaan and Balon Anito in Mariveles town. (PNA)

Politiko would love to hear your views on this...
Spread the love
Tags: Bagac, Bataan, Fisherman Jose Garcia
Disclaimer:
The comments posted on this site do not necessarily represent or reflect the views of management and owner of POLITICS.com.ph. We reserve the right to exclude comments that we deem to be inconsistent with our editorial standards.