BFFs to the rescue! China donates P150-M worth of military equipment to PH 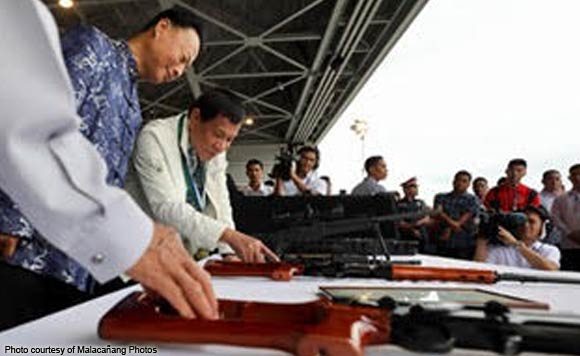 The People’s Republic of China, through Ambassador to the Philippines Zhao Jianhua, on Wednesday turned over some PHP590 million worth of military aid package to President Rodrigo Duterte in relation with the emerging threat of terrorism and piracy in Marawi City.

Jinhua turned over 3,000 riffles with 5 million ammunition and 90 units sniper rifles with 800,000 ammunition.

The military aid package was delivered at the Harrison Landing Zone, Clark Freeport, on board a two-cargo Ilyushin IL76 Chinese Military plane.

President Duterte, in his speech, said the firearms donation is one of the defense cooperation matters discussed by the People’s Republic of China President Xi Jin Ping in his visit to China last October 2016, as part of the military package to the Philippines, in relation with the emerging threat of terrorism and piracy in Mindanao.

The Chief Executive relayed his sincerest thanks to Xi Jin Ping through Jianhua for the assistance extended to the country that could help in the national government’s campaign against the ISIS-inspired terrorism in Marawi.

“This will not only strengthen our commitment to support each other in the times of need but this will highlight the dawn of a new era in Philippine-Chinese relations ,” the President said.

As the troops in Marawi wrap up the operations against the remaining terrorists in the area, the President said he welcomed the assistance of the China government to the victims and in rebuilding the city with the non-interference in the state of affairs of the national government.

“I am confident that we will end this dark episode and move on in rebuilding the city back to its normal life,” he said.

The President stressed that for as long as the Armed Forces of the Philippines (AFP) says it is not safe, martial law will stay in Marawi

He furthered that the ISIS needs to be dealt with the same ferocity but not the same brutality.

“President Duterte’s presence in this turnover ceremonies highlights great importance he attached between the bilateral relations of the two governments,” Jianhua added.

He also expressed sincere appreciation to President Duterte for his friendly policy to China and cooperative policy towards China.

“The donation is not fake, it is not fake in the sense it marks a new era between two military forces of China and Philippines. I know you are fighting against ISIS related terrorism, the donation of arms to the AFP will contribute the battle against ISIS,” Jianhua said.

He said the 50 million yuan firearms donation is but the first batch of firearms, adding that they will deliver the second batch in the coming months.

“Terrorism is an enemy that both China and Philippines are facing and requires two military’s joint military exercises to fight,” Jianhua said.

Aside from PHP15 million donation earlier that China has extended for the rehabilitation of Marawi, Jianhua announced to donate PHP5 million to families of the soldiers killed in battle and to wounded soldiers.

“We will help not only the fight against terrorism but also to rehabilitate and reconstruct the conflict-affected areas in Marawi. I hope the China participation in the rehabilitation of Mindanao will help the comprehensive settlement of the issue of terrorism,” Jianhua said.

“China is your good neighbor, good partner and your good relatives and China will remain so in the many years to come,” he added. (PNA)

Politiko would love to hear your views on this...
Spread the love
Tags: Armed Forces of the Philippines, China, Marawi City, Philippines Zhao Jianhua, president Rodrigo Duterte
Disclaimer:
The comments posted on this site do not necessarily represent or reflect the views of management and owner of POLITICS.com.ph. We reserve the right to exclude comments that we deem to be inconsistent with our editorial standards.