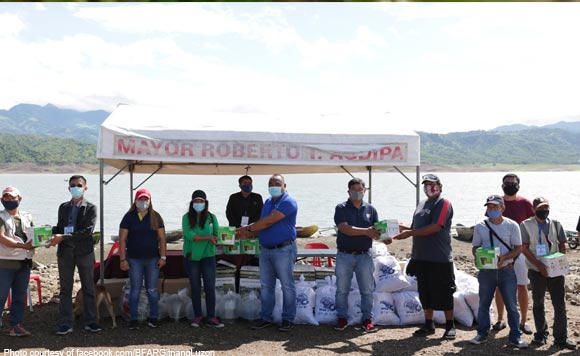 CITY OF SAN FERNANDO, Pampanga – The Bureau of Fisheries and Aquatic Resources (BFAR) 3 (Central Luzon) has provided assistance to some fisherfolk in Pantabangan, Nueva Ecija.

BFAR-3 Director Wilfredo Cruz and BFAR Assistant Director for Operations Nestor Domenden, together with some local officials of Pantabangan, led the distribution on Thursday of 25 gillnets, 50 solar lamps, and five 10 horsepower marine engines that could help uplift the fisherfolk’s socio-economic condition.

“Fishing by gill net or ‘panti’ is widely practiced in Pantabangan Dam, which is recognized as an energy-efficient, profitable, and selective gear,” he said.

The BFAR also conducted the stocking of ayungin and dalag, both endemic freshwater species, to better manage and improve the productivity of the reservoir, considered as one of the largest in Southeast Asia.

The activity was under the agency’s “Balik Sigla sa Ilog at Lawa” or BASIL program that aims to repopulate freshwater bodies with non-invasive and indigenous fish species.

Cruz expressed hope that this intervention would help augment the livelihood of the residents, as well as increase fish supply in the area.

Pantabangan Mayor Roberto Agdipa thanked BFAR for the assistance that could help the fisherfolk cope with the ongoing health crisis.

Cruz earlier said the man-made impoundment was primarily built for rainwater storage but carp and tilapia thrive in the water, benefiting some 700 fisherfolk in the community.

He said although food supply in Central Luzon is stable, a back-up plan is still essential to ensure continuous food security amid the continuous threat brought by the coronavirus disease 2019 (Covid-19) pandemic.

“As a coping strategy, BFAR-Central Luzon carries on with activities such as these to ensure that there is a steady fish supply for the region,” Cruz added. (PNA)

Politiko would love to hear your views on this...
Spread the love
Tags: BFAR, Bureau of Fisheries and Aquatic, City of San Fernando, Nueva Ecija, Pampanga
Disclaimer:
The comments posted on this site do not necessarily represent or reflect the views of management and owner of POLITICS.com.ph. We reserve the right to exclude comments that we deem to be inconsistent with our editorial standards.