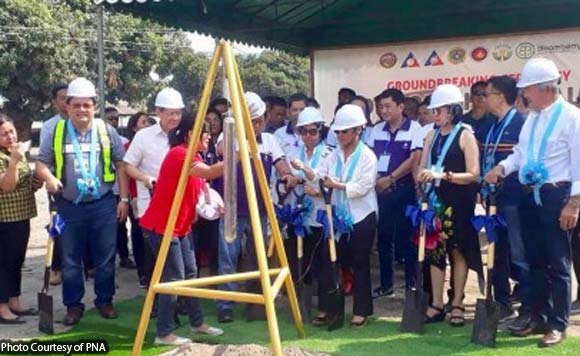 CITY OF SAN FERNANDO, Pampanga –The first OFW Hospital and Diagnostic Center that will cater to the medical needs of overseas Filipino workers and their families will soon rise in this province.

Labor Secretary Silvestre Bello, together with House Speaker Gloria Macapagal-Arroyo and Governor Lilia Pineda, led on Wednesday the groundbreaking ceremony for the facility, which will rise on a two-hectare lot owned by the provincial government of Pampanga at the Provincial Engineering Office (PEO) compound, Barangay Sindalan, this city.

The House Speaker said the project is a brainchild of Governor Pineda.

“Because health is the governor’s priority, the lot worth PHP500 million is donated by the provincial government of Pampanga for the construction of the hospital,” Arroyo noted in her speech.

She said the PHP400 million construction cost of the hospital will be shouldered by business mogul Enrique Anselmo Klar Razon Jr. of Bloomberry Resorts and Hotels.

The Philippine Amusement and Gaming Corporation, chaired by Andrea Domingo, on the other hand, will provide hospital equipment worth PHP200 million, with full support from the Department of Labor and Employment, Overseas Workers Welfare Administration, Department of Health and Philippine Health Insurance Corporation (PhilHealth).

Meanwhile, Arroyo called on lawmakers in Central Luzon to file a bill that would provide funds for running and maintaining the hospital.

The construction of the OFW Hospital and Diagnostic Center is expected to be completed in less than two years. (PNA)

Politiko would love to hear your views on this...
Spread the love
Tags: Barangay Sindalan, Diagnostic Center, Governor Lilia Pineda, House Speaker Gloria Macapagal-Arroyo, Labor Secretary Silvestre Bello, OFW Hospital, overseas Filipino workers, Provincial Engineering Office (PEO)
Disclaimer:
The comments posted on this site do not necessarily represent or reflect the views of management and owner of POLITICS.com.ph. We reserve the right to exclude comments that we deem to be inconsistent with our editorial standards.