Bataan’s incumbent politikos vie for another term in power 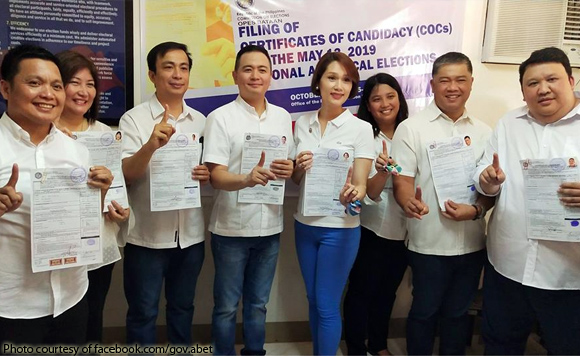 Bataan Governor Albert Garcia and Vice Governor Cris Garcia will attempt to secure another term in power by participating in next year’s elections.

The leading politikos of the province filed their certificates of candidacy last Tuesday, Oct. 16, at the local office of the Commission on Elections in Balanga City.

They were joined by Bataan 1st District Representative Geraldine Roman and aspiring board members of the province’s First and Second Districts.

Other local officials, supporters and friends were present to cheer on.

The politiko was joined by his mother, Vicky Garcia, his sister Dinalupihan Mayor Gila Garcia, and his supporters.(END)

Politiko would love to hear your views on this...
Spread the love
Tags: 2nd District Representative Jose Enrique Garcia, Balanga City, Bataan 1st District Representative Geraldine Roman, Bataan Governor Albert Garcia, Commission on Elections, Dinalupihan Mayor Gila Garcia, Vice Governor Cris Garcia
Disclaimer:
The comments posted on this site do not necessarily represent or reflect the views of management and owner of POLITICS.com.ph. We reserve the right to exclude comments that we deem to be inconsistent with our editorial standards.