Bataan under state of calamity 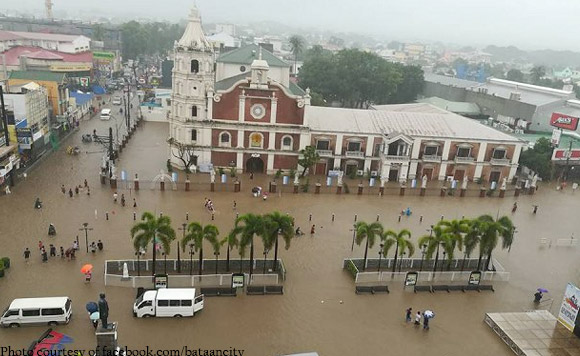 The Sangguniang Panlalawigan on Sunday afternoon passed a resolution, approved by Governor Albert Garcia, declaring the entire province of Bataan under state of calamity after flash floods, brought about by heavy rains, engulfed many areas.

The floods inundated many portions of both the MacArthur and Roman highways, which rendered them impassable to all types of vehicles. In Samal town, people waded through the flooded roads to get to their destinations.

All of the province’s 11 towns and lone city suffered from the onslaught of heavy rainfall caused by typhoon Josie, which was worsened by the southwest monsoon.

In Hermosa, six villages were submerged in floods from two feet to more than six feet deep.

Three barangays in Mariveles were flooded up to three feet.

Reports showed that rescue operations were ongoing in Balanga City and the town of Dinalupihan, which were earlier declared under the state of calamity.

Classes in all levels, in both public and private schools, and work in government offices, except those involved in rescue operations, in Bataan were suspended on Monday. (PNA)

Politiko would love to hear your views on this...
Tags: Balanga City, Bataan, Governor Albert Garcia, MacArthur, Roman highways, Samal, San Juan, San Roque, Sangguniang Panlalawigan, Tabing-Ilog
Disclaimer:
The comments posted on this site do not necessarily represent or reflect the views of management and owner of POLITICS.com.ph. We reserve the right to exclude comments that we deem to be inconsistent with our editorial standards.