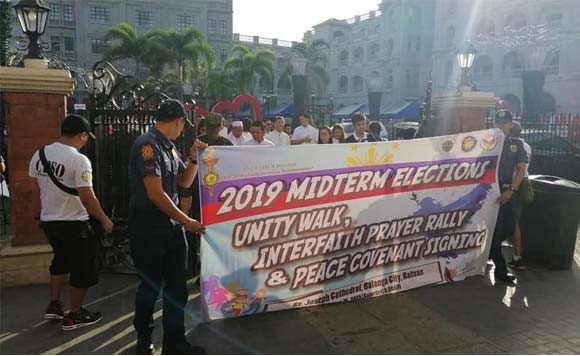 BALANGA CITY, Bataan — Municipal, provincial and congressional candidates in Bataan on Saturday signed a peace covenant for honest and peaceful elections on May 13 at the Saint Joseph Cathedral here.

The event was sponsored by the Bataan police, 48th Infantry Battalion of the Philippine Army, Commission on Elections and the Parish Pastoral Council for Responsible Voting.

Candidates in each of Bataan’s 11 towns and one city signed the Integrity Pledge Boards and vowed to abide by the tenets of the Constitution, election laws, rules and regulations and to respect the sanctity of the electoral exercise. Bataan Governor Albert Garcia and Vice Governor Cris Garcia, both running unopposed for fresh terms in the May elections, led the Integrity Pledge.

Bishop Ruperto Santos of the Diocese of Balanga advised the electorate not to vote for candidates based merely on names but on what they have done and shown.

He said the candidates should be honest, industrious and helpful.

Santos said candidates should not be thinking only of themselves.

Senior Supt. Marcelo Dayag, Bataan police director, said he was hopeful that like the past elections in Bataan, the coming electoral exercise would be peaceful.

Aside from the Roman Catholic prayer delivered by Santos, Imam Hassan Macacua recited a Muslim prayer and Pastor Jhonny Tomboc, a Christian prayer.

Doves were released to cap the event. (PNA)

Politiko would love to hear your views on this...
Spread the love
Tags: 48th Infantry Battalion, Bataan, Bishop Ruperto Santos, Commission on Elections, Governor Albert Garcia, Municipal, peace covenant, Philippine Army, provincial
Disclaimer:
The comments posted on this site do not necessarily represent or reflect the views of management and owner of POLITICS.com.ph. We reserve the right to exclude comments that we deem to be inconsistent with our editorial standards.