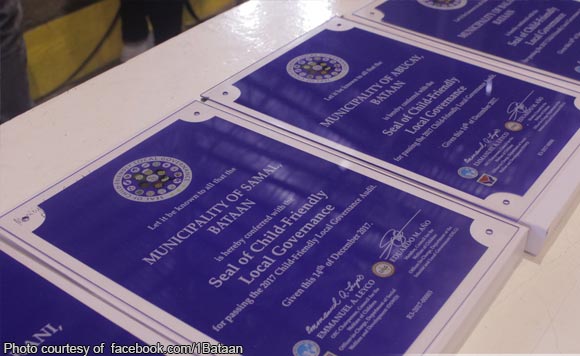 According to Bataan Governor Albert Garcia, Ma. Edna Estal of the Council for the Welfare of Children led the awarding rites.

Bataan’s 11 municipalities and one city were conferred with the award “for having a child friendly and child sensitive society.”

Another highlight of Monday’s flag raising ceremony is the turnover by the Department of Social Welfare and Development of P33,340,000 to Gov. Garcia for the benefit of the Sustainable Livelihood Project for Bataenos.

Garcia also thanked his brother, Bataan 2nd District Jose Enrique Garcia, for the donation of four ambulances to be used by the Metro Bataan Development Authority, the Provincial Disaster Risk Reduction and Management Office, the Bataan Drug Treatment and Rehabilitation Center, and the Mariveles District Hospital for emergency and disaster response.

Politiko would love to hear your views on this...
Spread the love
Tags: Balanga City Mayor Francis Garcia, Bataan, Mariveles Mayor Ace Jello Concepcion, Orani Mayor Efren Pascual, Samal Mayor Gene Dela Fuente
Disclaimer:
The comments posted on this site do not necessarily represent or reflect the views of management and owner of POLITICS.com.ph. We reserve the right to exclude comments that we deem to be inconsistent with our editorial standards.