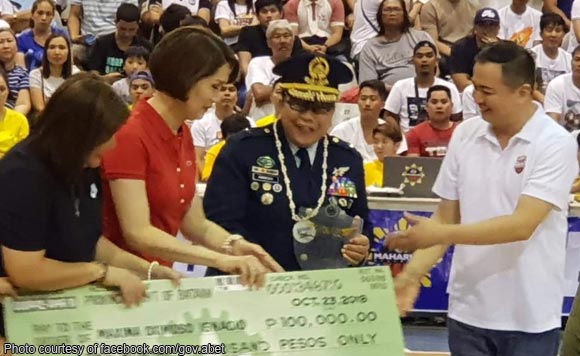 The top politikos of Bataan gave P100,000 and a plaque of appreciation to a female Air Force general who hails from the province.

In a post last Tuesday on his Facebook page, Bataan Governor Albert Garcia said he led officials of the provincial government in conferring Brig. Gen. Maxima Ignacio with the recognition.

Garcia said Ignacio, who is from Bagac town, is a “Pride of Bataan” for being the first female pilot of the Philippine Air Force, and its first lady general.

A photo shared by the governor shows Ignacio receiving the symbolic Landbank check and plaque.

The conferment was done during the MPBL match between Bataan Risers and Bulacan Kuyas at the Bataan People’s Center in Balanga City.

Politiko would love to hear your views on this...
Post Views: 0
Spread the love
Tags: Air Force general, Balanga City, Bataan People's Center, Brig. Gen. Maxima Ignacio, Landbank, Representative Geraldine Roman, Vice Governor Cris Garcia
Disclaimer:
The comments posted on this site do not necessarily represent or reflect the views of management and owner of POLITICS.com.ph. We reserve the right to exclude comments that we deem to be inconsistent with our editorial standards.