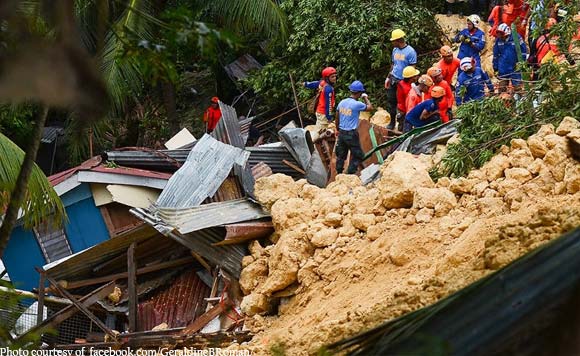 Bataan 1st District Representative Geraldine Roman will look into the tragic landslide in Naga City, Cebu that so far has left more than 50 people killed and some 40 others unaccounted for.

“As Committee Chair of the House Committee on Disaster Management, I will do my very best to get to the bottom of this,” Roman said on her Facebook account.

“A complete and thorough investigation must be conducted as soon as possible… We need to learn from these unfortunate incidents that have cost precious lives and caused great damage to properties,” she added.

The landslide in Naga City took place in the early morning of Sept. 20, near the quarry site of Apo Land and Quarry Corporation in Barangay Tinaan.

“For the past several days, our country has been battered by storm after storm. But continuous, heavy rain isn’t the sole cause of this tragedy in Naga City,” Roman said.

“Reports are now stating that residents believe that mining may have caused the cracks in the mountainside.”

The politiko said she will “work to lessen the impact of natural disasters on communities across the country.”

Roman expressed sympathies to the victims and their families, and praised “the braved rescuers.”

In a separate interview on Monday, House Speaker Gloria Macapagal-Arroyo said she hopes that the bill creating a Disaster Management Department will soon be approved on Third Reading.

Politiko would love to hear your views on this...
Post Views: 1
Spread the love
Tags: Apo Land and Quarry Corporation, Barangay Tinaan, Bataan, Cebu, Geraldine Roman, Gloria Macapagal-Arroyo, Naga City
Disclaimer:
The comments posted on this site do not necessarily represent or reflect the views of management and owner of POLITICS.com.ph. We reserve the right to exclude comments that we deem to be inconsistent with our editorial standards.