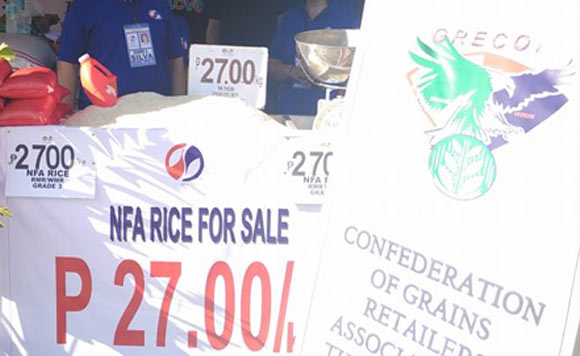 “It was only five sacks, thus it was already consumed last Good Friday,” he said.

NFA rice containers in his store instead have commercial rice sold for P40 per kilo and “binlid” (small rice particles) sold for P27 each kilo.

The NFA rice is being sold at P27 (regular milled) and P32 per kilo for the well-milled.

On January 15, 2018, NFA stopped supplying rice to its accredited retailers in Bataan, saying its stock was reserved for calamities. It resumed its delivery after a few weeks.

“We have a supply of NFA rice within a month but was all gone before the Holy Week,” NFA rice retailer Milagros Villasenior said.

She said NFA had supplied them with rice procured from local farmers.

As to commercial rice, she said the price in her store had increased to at least PHP42 a kilo.

“Instead of going down, the price during the Holy Week went up because the traders scrambled for the rice yields,” she said.

NFA provincial manager Adelaida Nuestro was out in a conference and no one in the office could be interviewed on Tuesday.

A source, however, at the NFA provincial office, who requested anonymity, confirmed that their last delivery of NFA rice to retailers was last Tuesday and that they could only resume supply after the arrival of imported rice.

The same source said they have already disposed of their stock purchased from local farmers. (PNA)

Politiko would love to hear your views on this...
Spread the love
Tags: National Food Authority's (NFA), NFA provincial manager Adelaida Nuestro, NFA rice, Retailer Roel dela Rosa
Disclaimer:
The comments posted on this site do not necessarily represent or reflect the views of management and owner of POLITICS.com.ph. We reserve the right to exclude comments that we deem to be inconsistent with our editorial standards.