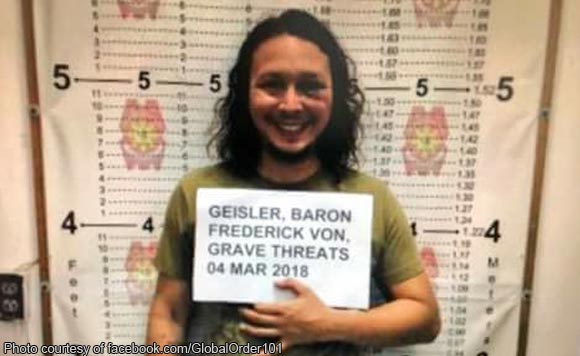 Pampanga police arrested Baron Geisler after he allegedly threatened to kill his brother-in-law at his house in Angeles City on Monday.

According to officers from the Angeles City Police Station 3, Geisler was charged with illegal possession of a deadly weapon after he allegedly threatened to kill Michael Robin Stone Morales of Barangay Pulung Maragul.

Morales told the police that on Monday afternoon, the actor went berserk in front of his house and threatened to kill him with a kitchen knife that he was holding at that time.

According to reports, Geisler said Morales broke into his home in Angeles City and assaulted him last week. He posted photos of his bruised face on social media.

Politiko would love to hear your views on this...
Spread the love
Tags: Angeles City, Angeles City Police Station 3, Barangay Pulung Maragul, Baron Geisler, Michael Robin Stone Morales
Disclaimer:
The comments posted on this site do not necessarily represent or reflect the views of management and owner of POLITICS.com.ph. We reserve the right to exclude comments that we deem to be inconsistent with our editorial standards.