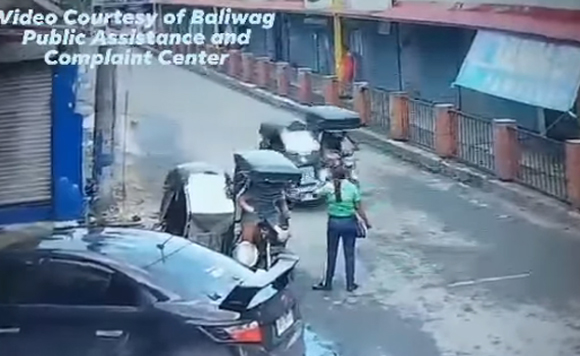 No form of injustice will get pass Baliwag Mayor Ferdie Estrella.

He shared a now viral video on Facebook of a tricycle driver getting involved in a scuffle with traffic enforcer Rhodora Delos Reyes.

Mayor Estrella described the enforcer as “valiant” when she bravely called out the driver for not wearing a face mask and a face shield.

The driver did not take this lightly as he tried to escape by pushing his tricycle forward despite the efforts of Rhodora to stop it.

Because of this piece of evidence, the driver is now in jail and will be facing many legal cases.

In the comments section, the driver’s behavior was barraged with negative words.
https://www.facebook.com/FerdieVEstrella/posts/3582434548475574

Politiko would love to hear your views on this...
Post Views: 24
Spread the love
Tags: Baliwag Mayor Ferdie Estrella, Facebook, Rhodora Delos Reyes
Disclaimer:
The comments posted on this site do not necessarily represent or reflect the views of management and owner of POLITICS.com.ph. We reserve the right to exclude comments that we deem to be inconsistent with our editorial standards.