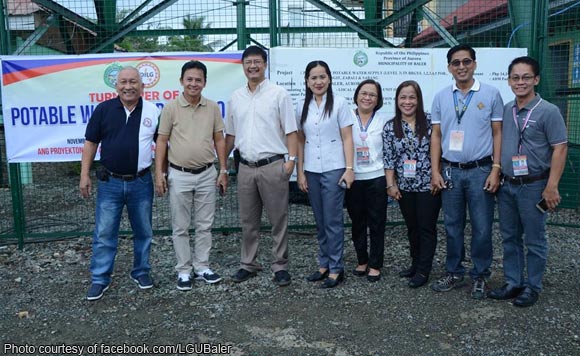 According to a Facebook post of the municipal government, Bihasa joined Bureau of Fisheries Region 3 Director Lilian Garcia and other local officials in the inauguration of the Baler Community Fish Landing Center in Barangay Sabang.

The municipal government said the Community Fish Landing Center is part of the of Targeted Actions to Reduce Poverty and Generate Transformation in the Fishery Sector (TARGET) program of the Bureau of Fisheries and Aquatic Resources.

It is aimed at improving the livelihood of fishermen.

Bihasa also received, in behalf of the local government, the Potable Water System project from the Department of Interior and Local Government.

The project will ensure potable water supply in the entire town proper of Baler and nearby barangays.

Politiko would love to hear your views on this...
Spread the love
Tags: Aurora, Baler, Baler Community Fish Landing Center, Barangay Sabang, Department of Interior and Local Government), Director Lilian Garcia, Mayor Nelianto "Pilot" Bihasa, Potable Water System project
Disclaimer:
The comments posted on this site do not necessarily represent or reflect the views of management and owner of POLITICS.com.ph. We reserve the right to exclude comments that we deem to be inconsistent with our editorial standards.