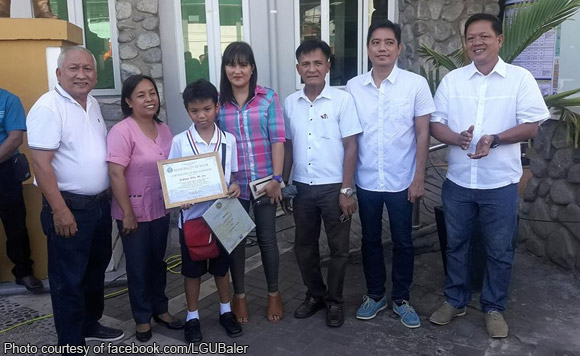 The local government of Baler has conferred an award to a student, along with his trainers, for winning a bronze medal in a mathematics competition nationwide.

The certificate of recognition was given to Julian Nite M. Yu of Baler Central School for winning in the 2018 International Kangaroo Mathematics Competition – Philippines, Middle Primary Division.

Yu’s trainers were Karen M. Valenzuela and Gladys B. Renomeron.

The award is a “proof that the quality of education is world class as this synchronized international competition was held all over the world with the same questionnaires and standards,” Baler local government said.

Such recognition was a “well-deserved dinstinction worthy of emulation and inspiration” to all the youths and educators not only in Aurora but in the country, it added.

Politiko would love to hear your views on this...
Spread the love
Tags: Baler Central School, Emmanuelle Galban, Gladys B. Renomeron, International Kangaroo Mathematics Competition - Philippines, Julian Nite M. Yu, Karen M. Valenzuela, Middle Primary Division, Noel Go, Ramir Duaso, Reynaldo Mapindan
Disclaimer:
The comments posted on this site do not necessarily represent or reflect the views of management and owner of POLITICS.com.ph. We reserve the right to exclude comments that we deem to be inconsistent with our editorial standards.