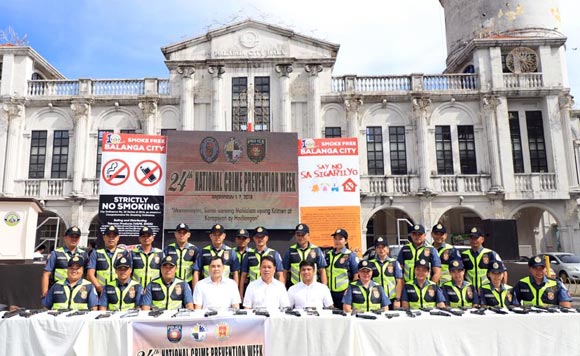 The police in the city of Balanga in Bataan retrieved over the weekend 60 loose firearms during its implementation of “OPLAN KATOK,” a police statement said Monday.

The firearms, which were all collected on Saturday from 60 individuals in the different parts of the city, were presented to the public at the Plaza Mayor de Ciudad de Balanga on Monday during the kick-off ceremony of the ‘National Crime Prevention Week.’

“The OPLAN KATOK” conducted by the local police was triggered as an off-shoot counter-mechanism after a continuous series of shooting incidents perpetrated in the country and as early preparations in the upcoming 2019 national elections,” the Balanga City Police said.

“Not only it is an audit/accounting (of loose firearms) in nature, but significantly, (it is) a ‘Crime Prevention’ (measure),” it added.

The firearms were marked for safekeeping by the police for the meantime.

Saturday’s operation did not result in the filing of charges against the owners of the loose firearms since the surrender was made in good faith, a police officer said.

According to the city police statement, the PNP announced in July that it is mulling a nationwide gun amnesty to account for almost one million loose firearms and to encourage all individuals in possession of a loose firearm to get a license.(END)

Politiko would love to hear your views on this...
Spread the love
Tags: Balanga, Bataan, OPLAN KATOK
Disclaimer:
The comments posted on this site do not necessarily represent or reflect the views of management and owner of POLITICS.com.ph. We reserve the right to exclude comments that we deem to be inconsistent with our editorial standards.