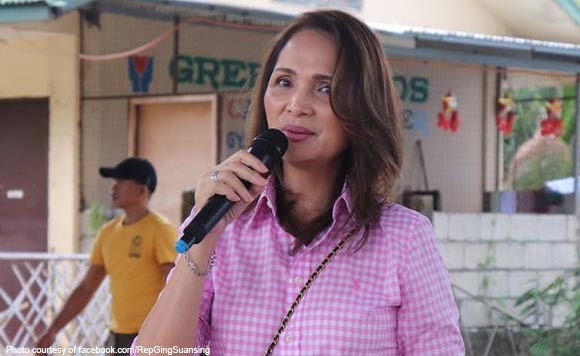 Nueva Ecija Rep. Estrellita Suansing believed that the proposed joint venture between the Talavera Water District and Pamana Water Corp. will be disadvantageous to the residents of the municipality.

Suansing saw no need for the Talavera Water District to enter a joint venture with the company owned by businessman Lucio Co since it is doing a good service and even generating income.

Suansing said the agreement, which may lead to the privatization of the Talavera Water District will result in increases in water rates and loss of jobs with the possible restructuring and reorganization.

Suansing’s privilege speech was referred to the House Committee on Government Enterprises and Privatization. A hearing was conducted on March 17 and April 8.

In the March hearing, Suansing said the current minimum being charged by Talavera Water District is P180 for those using 10 cubic meters and below.

Based on the proposed increases in the planned joint venture, Suansing said the minimum charge will be P269.

The average consumption, she said is 25 cubic meters, which is equivalent to P250 monthly. This will become P373.65 under the proposed joint venture agreement.

Lacsama said that based on the presentation made by Pamana in September 2020, the water bills under the Talavera Water District will be subjected to 12% Value Added Tax (VAT).

Talavera Mayor Nerivi Martinez, who also attended the hearing denied that the local government unit has something to do with the proposed joint venture.

Talavera Water District Board of Directors chairperson Jaime San Pedro insisted that there is currently no joint venture.

“We would like to reiterate that the passed and signed Board resolution was only for the purpose of the proponents to conduct feasibility study,” San Pedro said.

In the April 8 hearing, Jean Macaspac, Business Development head of Pamana Water Corp. said the company has enough experience in running water distribution and hired experts on the business.

She said Pamana was able to improve water services of Aliaga and San Leonardo towns in Nueva Ecija. Pamana also entered a joint venture with Candaba Water District in October 2020.

Pamana Water was established in 2015.

Macaspac admitted that Pamana sent a letter to Mayor Martinez but only to inform her of the company’s intention to the municipality.

Towards the end of the hearing, the committee approved the motion of Suansing to recommend to the House Committee on Good Government and Public Accountability to conduct investigation on possible misfeasance and malfeasance on the issues surrounding the Talavera Water District.

The committee also approved the motion for the creation of a resolution to suspend all pending proposal on joint venture agreements on water districts until the completion of review or audit by the Local Water Utility Administration and other concerned agencies.

Politiko would love to hear your views on this...
Post Views: 27
Spread the love
Tags: Estrellita Suansing, Pamana Water Corp, Talavera Water District
Disclaimer:
The comments posted on this site do not necessarily represent or reflect the views of management and owner of POLITICS.com.ph. We reserve the right to exclude comments that we deem to be inconsistent with our editorial standards.