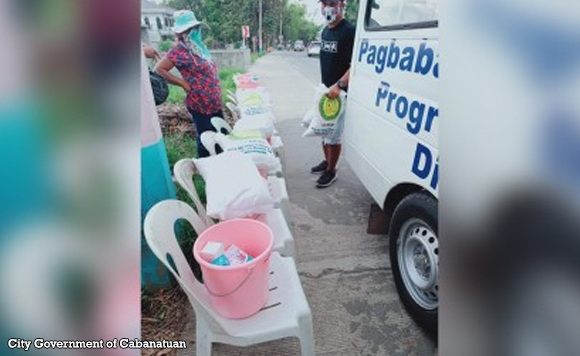 CABANATUAN CITY, Nueva Ecija – The city government, led by Mayor Myca Elizabeth Vergara, has launched another wave of food assistance for residents as the country continues to battle the coronavirus disease (Covid-19) pandemic.

Some 120,000 families received food packs, each containing a 10-kilo bag of rice, canned goods, and face shields from the city government, on top of the whole dressed chicken, vegetables, and grocery items they received since the start of the quarantine.

The city remains under modified general community quarantine (MGCQ) like the other parts of Central Luzon.

Sangguniang Panlungsod presiding officer and Vice Mayor Julius Cesar Vergara said on Thursday the food assistance was to keep people in the city’s 89 villages in a good state as quarantine restrictions stay.

To support farmers who lost market due to the pandemic, the Vergara family bought squash produce from nearby towns and added them to their food packs with two more whole chickens for each household.

The lawmaker also continued her “Alagang Ina” that gives away bags of basic baby needs to all women who are seven to nine months pregnant within the district.

Meanwhile, Vice Mayor Vergara said the city government has been conducting massive rapid anti-body testing where an additional ten-kilo bag of rice is given to participants.

“We want to have our economy recover because we are the one to jumpstart the economy of Nueva Ecija,” he said.

The testing has been extended to all employees of the Department of Education (DepEd), private companies here, and residents of municipalities within the province’s third district. Reactive patients are being swabbed on the spot.

He said the city government holds testing in different municipalities since it stands as the center of trade and commerce.

“Nagpupuntahan sila sa atin kasi nandito ang bangko at ang mga negosyo. Kailang proteksoyunan natin yung ating mga kalungsod at ganun din naman yung mga nagpupunta sa atin (They come to us because the banks and the businesses are here. We need to protect our city residents and those who are coming here),” he said. (PNA)

Politiko would love to hear your views on this...
Spread the love
Tags: Cabanatuan, coronavirus, Mayor Myca Elizabeth Vergara
Disclaimer:
The comments posted on this site do not necessarily represent or reflect the views of management and owner of POLITICS.com.ph. We reserve the right to exclude comments that we deem to be inconsistent with our editorial standards.