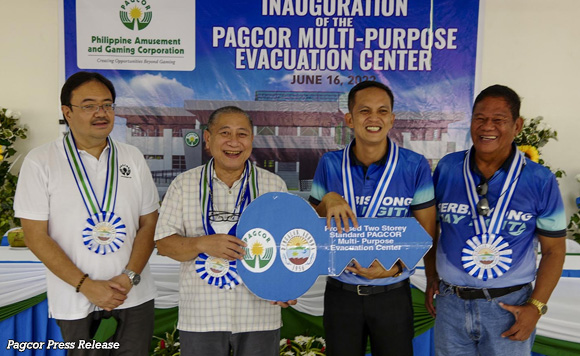 Residents of Dingalan town in Aurora province can now take shelter in a typhoon-resilient evacuation facility during big storms thanks to a project funded by the Philippine Amusement and Gaming Corporation (Pagcor).

A two-story Multi-Purpose Evacuation Center (MPEC) in Dingalan worth P50 million was opened on Thursday, according to a Pagcor statement quoted by the Philippine Information Agency on Friday.

A PIA report quoted Barangay Ibona Captain Ricardo Balala Jr. as saying their situation is “far from ideal because the classrooms, which they use as evacuation facilities during calamities, are not designed for such purpose.”

Dingalan Mayor Shierwin Taay said the MPEC in their area is a realization of a long-time dream.

Politiko would love to hear your views on this...
Spread the love
Tags: Dingalan, PAGCOR, typhoon-resilient evacuation center
Disclaimer:
The comments posted on this site do not necessarily represent or reflect the views of management and owner of POLITICS.com.ph. We reserve the right to exclude comments that we deem to be inconsistent with our editorial standards.