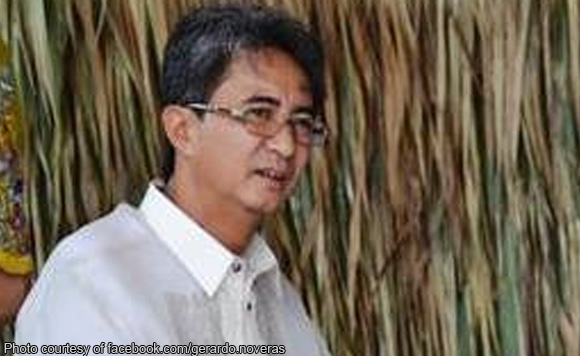 The Department of the Interior and Local Government (DILG) on Thursday served a nine-month suspension to Governor Gerardo Noveras over dump truck scam.

A DILG team headed by Assistant Regional Director Jay Timbreza went to the house of Noveras in Barangay 3, Maria Aurora town, to serve his suspension ordered by the Office of the Ombudsman.

The suspension stemmed from the complaint against Noveras filed by provincial engineer Rodante Tolentino and Amado Elson Egargue, head of the Provincial Disaster Risk Reduction and Management Office (PDRRMO), after the governor allowed the use of his own dump trucks in a government project being undertaken by a private contractor in Dinalungan town nearly four years ago.

During his suspension, Vice Governor Rommel Angara will serve as the acting provincial governor of Aurora.

The governor’s son, lawyer Christian Noveras, a provincial board member, said they were surprised that the suspension order was served as they were hoping for the dismissal of the case.

Prior to this, Noveras asked the Office of the Ombudsman to reconsider its decision suspending him for nine months.

He said he filed a motion for reconsideration on February 6 after receiving the January 15 decision of Ombudsman Conchita Carpio Morales on Jan. 29.

The Ombudsman found Noveras’ admission of ownership of the trucks was enough to hold him administratively liable, saying his claim of lack of knowledge was “untenable.”

“It is impossible for respondent to not have known that his dump trucks were used for the project considering their massive size and the project’s exposure to the public,” the decision said.

For the Ombudsman, the use of Noveras’ dump trucks “presumes that respondent received compensation therefrom.”

The governor described the suspension as “harsh,” saying he and his wife were not informed by their caretaker about an arrangement with Remnant Builders, the contractor of the P232,441 project at Dinalungan town in Aurora.

In their five-page joint complaint-affidavit filed with the Ombudsman for Luzon, Tolentino and Egargue cited that Noveras owned a trucking business known as RG & Triple C’s Trucking Services, including four 10-wheeler dump trucks.

They said that on October 28, 2014, Noveras awarded to Benguet-based Remnant Builders (RB) a government project for barangay site development worth P232,441.50 in Sitio Tambalungan, Barangay Nipoo, Dinalungan, this province.

The project involved the hauling of gravel and sand to the project site.

However, Tolentino and Egargue said during the implementation of the project, RB utilized equipment other than those in the list.

“Worse, the dump trucks used by RB in transporting the needed materials are owned by Noveras himself,” they said in their complaint.

The complainants showed as evidence the hauling report which indicated that on December 1, 2014, four dump trucks – bearing license plates FJG-853, FJG-863, FJG-864 and FJG-865 – were all used for the hauling, all of which are owned by Noveras who, Tolentino and Egargue said, can be presumed to have profited from the project.

A certifications issued by Luz Dela Cruz, chief of the Land Transportation Office (LTO) Diliman district office, showed that the four trucks’ registered owners were Noveras and his wife Rowena.

Copies of two hauling sheets dated December 1 and 3 showed that the contractor hauled gravel and sand from the Bungo river in Nipoo and Barangay Paleg 32 times using the four dump trucks owned by the Noveras couple.

The complaint added that in the attempt to cover up their illegal acts, the Noveras attached to one of the dump trucks – FJG-853 the word “Edfrobon” to make it appear it belongs to Edfrobon Corporation, a private firm which the provincial government often deals with.

In his counter-affidavit, Noveras said that he was not a member of the Bids and Awards Committee (BAC), and did not use his position as governor to award the project to Remnant Builders.

He added that it was the truck manager who transacted with Ulpiano Coralde Jr., a quarry permittee, regarding the use of his dump trucks in the project.

The governor also claimed that he had no knowledge of the incident, and argued that the dump trucks were previously used by Edfrobon in mining operations in Dinapigue, Isabela, which explains why the word “Edfrobon” was placed on them.

The Ombusdman, in its ruling, said that while there is no substantial evidence to support the charge for grave abuse of authority and grave misconduct, Noveras is however, liable for conduct prejudicial to the best interest of the service.

In a memorandum circular number 18-0026 issued by Noveras, it stated that “with utmost humility, the undersigned Noveras, informs the public that he will serving his suspension ordered by the Office of the Ombudsman starting today (Thursday).”

“I sincerely beseech you to continue with your commitment, hard work, and perseverance to serve the people of Aurora, and to give acting Governor Angara your total cooperation for the continued smooth operations of the provincial government so as not to hinder the progress that our province has experienced these past years. Rest assured that in due time, I shall return to perform the mandate entrusted to me by the people of Aurora with even more dedication and vigor,” Noveras said in his memorandum. (PNA)

Politiko would love to hear your views on this...
Spread the love
Tags: Amado Elson Egargue, Assistant Regional Director Jay Timbreza, Department of the Interior and Local Government, Governor Gerardo Noveras, Office of the Ombudsman, Provincial Disaster Risk Reduction and Management Office, Rodante Tolentino, Vice Governor Rommel Angara
Disclaimer:
The comments posted on this site do not necessarily represent or reflect the views of management and owner of POLITICS.com.ph. We reserve the right to exclude comments that we deem to be inconsistent with our editorial standards.