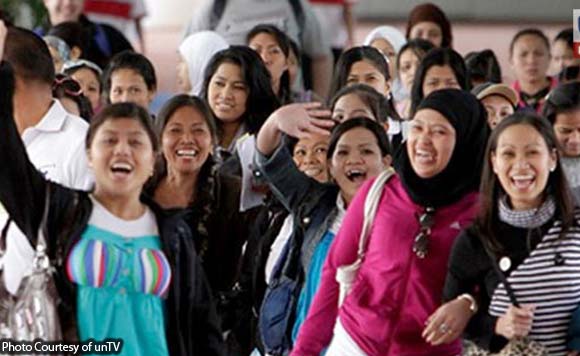 Pampanga 2nd District Representative Gloria Macapagal-Arroyo, who currently heads the House of Representatives, is asking President Rodrigo Duterte to negotiate with Russia for a framework to protect Overseas Filipino Workers there.

Joined by other members of Congress, Arroyo introduced House Resolution No. 2347 last month, urging Duterte “to pursue negotiations with the government of the Russian Federation towards formulating a framework or instrument that will ensure the promotion and protection of the welfare and rights” of OFWs.

According to the Resolution, the adoption of a Memorandum of Agreement or other form of instrument of cooperation will not only cement the relations of the two countries, it will also underscore the strategic importance of Russia as a viable destination of OFWs and afford greater protection to those already there.

The resolution states that there are 6,057 Filipinos working in Russia, Armenia and Ukraine, excluding those whose employment were not officially processed and approved by government.

In 2016, the top skills deployed to Russia are welders and flame cutters, mechanical engineering technicians, physiotherapy technicians, and assistants, plumbers and pipe fitters, among others, the resolution said.

It noted that while Filipinos are generally treated well by Russian employers, there are instances when Filipinos granted visas by the Embassy of Russia in Manila were refused entry into Russia, requiring a diplomatic and government-to-government effort to secure the safety and welfare of Filipino workers in Russia.

The resolution said deployment of OFWs to Russia has been increasing at an average of 6.7 percent per annum over the last 10 years.

Politiko would love to hear your views on this...
Post Views: 0
Spread the love
Tags: 2nd District, overseas Filipino workers, Pampanga, president Rodrigo Duterte, Representative Gloria Macapagal-Arroyo, Russian Federation
Disclaimer:
The comments posted on this site do not necessarily represent or reflect the views of management and owner of POLITICS.com.ph. We reserve the right to exclude comments that we deem to be inconsistent with our editorial standards.