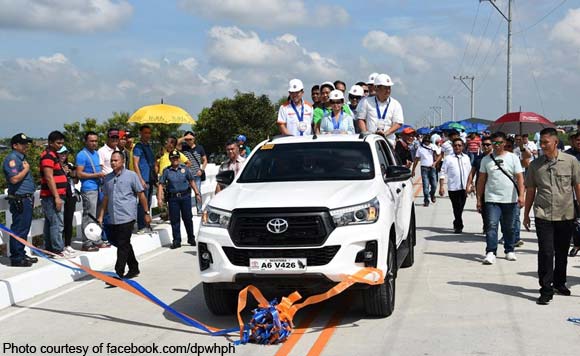 House Speaker Gloria Macapagal-Arroyo couldn’t contain Thursday her gratefulness to Public Works and Highways Secretary Mark Villar for a number projects the latter’s agency is implementing in her home province of Pampanga.

At the inauguration in Minalin, Pampanga of the three-bridge system in the said town and in Samal, Bataan, Arroyo profusely thanked Villar, the event’s guest of honor, for “all of the projects that he has brought to our beloved province of Pampanga.”

The project launched Thursday were flood- and earthquake-resistant bridges which, officials say, could spur growth in Pampanga and Bataan through safe and reliable roads.

Arroyo, who is Pampanga 2nd District Representative, expressed also her advance “thank you” to Villar for his expected return in Pampanga next month for the launch of a flood control program project in the province.

Moreover, the 71-year-old politician, who was president from 2001 up to 2010, credited Villar for allotting funds for the construction of the 29-kilometer road linking Lubao, Guagua, Minalin and Sto.Tomas towns.

She appealed as well to the agency to conduct a study for a bridge project in the province that may be funded by China’s official development assistance.

Villar is a son of Senator Cynthia Villar and former Speaker Manny Villar. The latter is best remembered for facilitating the impeachment process starting 2000 against then President Joseph Estrada that later led to Arroyo’s assumption to power in 2001.(END)

Politiko would love to hear your views on this...
Tags: Bataan, DWPH, former Speaker Manny Villar, House Speaker Gloria Macapagal-Arroyo, Pampanga, Pampanga 4th District Rep. Juan Pablo Bondoc, Samal, Secretary Mark Villar, Senator Cynthia Villar
Disclaimer:
The comments posted on this site do not necessarily represent or reflect the views of management and owner of POLITICS.com.ph. We reserve the right to exclude comments that we deem to be inconsistent with our editorial standards.