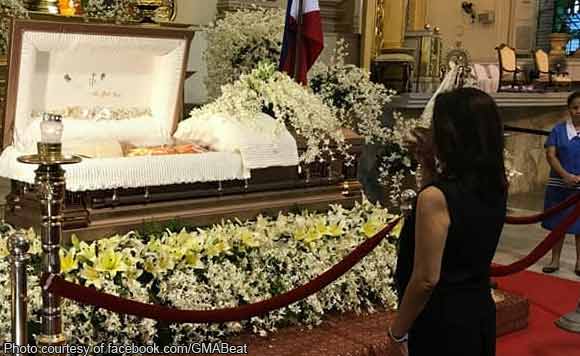 Arroyo was welcomed by Cebu Archbishop Jose Palma, who celebrated the noontime Requiem Mass for Vidal.

The former president, who also blessed the late Cardinal’s coffin with holy water, described Vidal as a “man of peace and a man of reconciliation”.

She said Vidal had advised her to visit former president Joseph Ejercito Estrada in detention and reconcile with her predecessor.

Arroyo was flanked by Cebu City Mayor Tomas Osmeña, Danao City Mayor Ramonito Durano, and former Presidential Assistant for the Visayas Felix Guanzon on the pew during the mass.

Tan also expressed his gratitude to the Cebuano public for their “undying love” for the late archbishop.

The Cebu City Government will offer free rides for city residents who will attend Vidal’s funeral on Thursday, which has been declared a special non-working holiday in Cebu by Malacañang through Proclamation No. 333, signed by Executive Secretary Salvador Medialdea, by authority of the President.

Land Transportation Franchising and Regulatory Board-7 Director Ahmed Cuizon said they had already issued special permits for the buses that would be deployed to pick up those who wish to witness the funeral.

The offer of free rides is also intended to minimize traffic congestion along the funeral route. Aside from the City’s Kaohshiung Buses, some buses of Valiacar Corp. (Ceres Bus Line) will also pick up passengers along the following routes: