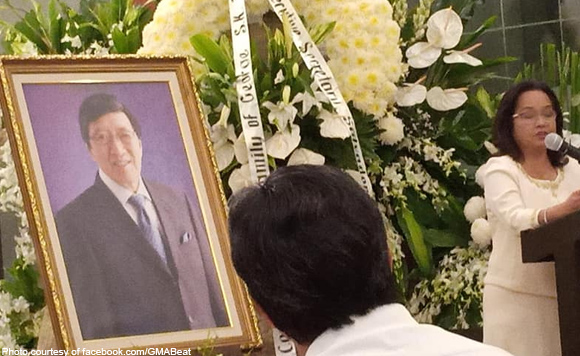 Speaker Gloria Macapagal-Arroyo paid her respects to the late Metrobank founder and Chairman George S.K. Ty, who passed away on November 23.

The Central Luzon politiko delivered her eulogy for Ty during the latter’s wake.

Arroyo described him as a “pioneer, entrepreneur, philantrophist, tycoon, taipan, legend, and yet as a person, gracious and humble.”

“Truly, a rare combination. It may be some time before we see someone like him again,” said Arroyo.

BANKING LEGEND. SGMA paid tribute to Metrobank Founder and Chairman Dr. George S.K. Ty in her eulogy during his wake….

Politiko would love to hear your views on this...
Spread the love
Tags: Metrobank founder and Chairman George S.K. Ty, Speaker Gloria Macapagal-Arroyo
Disclaimer:
The comments posted on this site do not necessarily represent or reflect the views of management and owner of POLITICS.com.ph. We reserve the right to exclude comments that we deem to be inconsistent with our editorial standards.